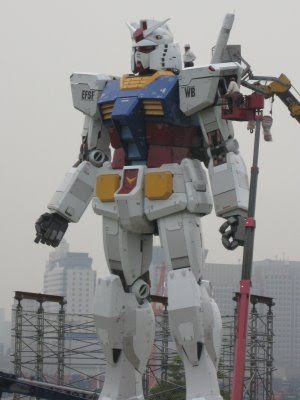 Over the years we've been talking about how Japan could one day make a giant mech/Gundam.  We've seen Bandai make that 1/1 Gundam statue with lights effects but this bit of news can make any anime fan like me grin with excitement...

Apparently, Japan's Liberal Democratic Party is "seriously considering the development of Gundam."  Yes, you heard that right, a real functioning Gundam.  As stated in a post from a few years back...the cost of creating a real, functioning Gundam was estimated to be at around $730 million dollars.

The media here (like MSN) are laughing at the idea...yes, a big robot might not be the best idea in a bad economy but then again,  looking into different technology in robotics would be a good thing for innovations for the future..and yes, space flight can be tied into that in my opinion.

Time to get some g-force training but at 28..I think I'm 1 years too old to be a test pilot.