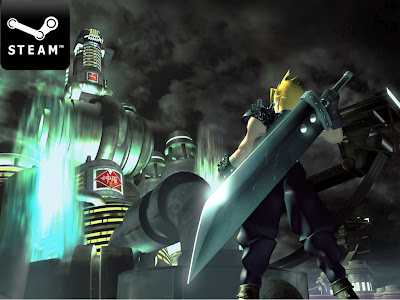 Like it or not, Final Fantasy VII is the most loved game of the entire Final Fantasy series and though many of us (including me) would love to see a true remake to the game, this is still a nice little upgrade.  FFVII also holds a special place for me as it was this game and Tifa Lockhart that initialed my interest in Japanese culture and thus started my anime fandom, this site and me meeting my fiancee.

Based on the European Steam product page (seen in the screenshot below), this new PC version of Final Fantasy VII will take advantage of today's paradigms in online (and overall) gaming like DLC, achievements and (pun intended) Cloud saves. As an old school gamer, I sometimes share the distaste in the way DLC,  achievements, Facebook shares, etc are abused in today's games but I find it comforting that a whole new generation of gamers (and anime fans) will get to see why we hold this game so dear.


There'll be 36 achievements and the DLC is something called a "character booster".  In short, you can pay real money for extra Exp, Phoenix Downs and other items/stats.  This kind of irks me but I guess Square-Enix will do what they can to bank off from gamers who just don't want to face the game at face value and default difficulty.  FFVII can at times be very hard, but like most FF games, the key is to just grind out tons of battles and build up your characters.  I don't hate DLC though, as I plan on doing so in my game, Tenshi-Oni. I have to get with the times and people will look for achievements, cloud saves, Facebook/social media shares and DLC which Tenshi-Oni will have, too...just I won't be charging for DLC in the paid version until I create value-adding expansions/features.  Is paying real money for extra Phoenix Downs worth it in FFVII?..I guess that's up to you gamers.

The downside to this is that this isn't a true remake to the game, just a New Game+ of sorts.  Yet, as many of us have seen with games like Skyrim and MineCraft, an avid fan-base can create amazing mods that really do add to the game.  This is the possibly for FFVII on Steam (and that is why I'm so excited that I sent out this blog post after way too long of a hiatus..another one due to work -_-).  I'd imagine the first mods will be something about bringing Aeris back to life and making Tifa sexy, in addition to graphical code.  Mods could also add chapters to the story if the modders are keen enough on the code. We've already seen mods in Skyrim that take the player to whole new maps so us crazy FFVII fans could probably take this game into a different direction.


The game will be pretty cheap in price too at around $15 or so, so when it comes out...get it. 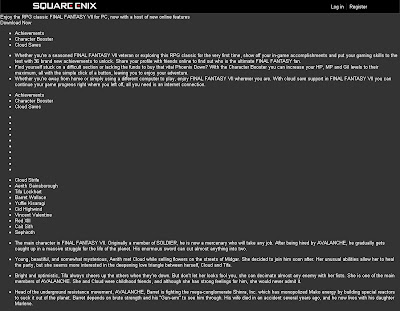