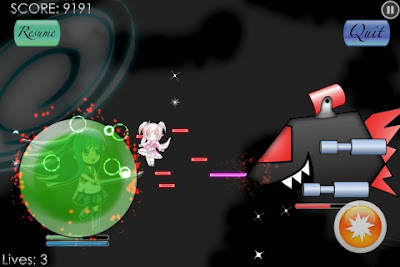 Finished adding the newest move to the TenshiOni game... the defense shield.  Playing the demo of the game I noticed this urge to block attacks and so now you can.  Up-swiping on iPhone/iPad quickly creates a shield that for now just blocks and repels enemy fire.  I might make it lower the attack enemies give if they collide into you...but I mainly have that determined by which form you are in comparison to the enemy, ie: if you are in human form, an angel or demon type enemy attack will hurt more.  I might change the coloring of the effect and maybe even have some reflected attacks hurt the enemy. (particularly in boss battles)

Here's what's next in line:


Once the combo system is done and the basics of the Super-Mode finishing moves are set... my voice actors for the girls will get their much delayed lines ^^;;  Sorry about the wait Danielle, Kenneos and Madi.