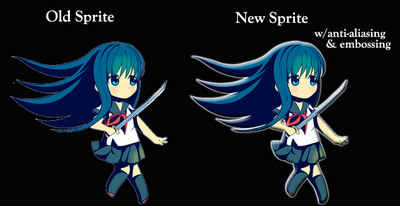 Been slaving away all weekend fixing some nasty bugs brought on by updates to the software I use to program the game -_-  Yet, the work has payed off as most of the bugs are done and I have a few new tidbits to share about the game that I'm thankfully getting the much needed time to work on.

First off, what can't be seen so much just yet but I've yet again reworked the space game engine that I bought to get the game rolling.  This time, I created more to the initial GameObject class allowing for reactions to each type of attack Fumi duels out.  Before this, I already reverse engineered the thing to understand Soul Types (Angel, Human and Demon), but I can't have every enemy react the same way to every attack.  You programers probably know of the wonderful Object Oriented Design topics of Inheritance and Polymorphism.  What I was able to do was make a default reaction to Fumi's three main attacks..this would have been done sooner if the Physic Engine I use didn't suddenly parse data in a different order than my one file originally did (if you read my tweets you'll see what I mean).

For more info that artists and graphic designers will get..I also cleaned up Fumi's in-game sprites.  One of the major tasks in the art aspects of game design is making sure to do some anti-aliasing (jagged edge fixing) when needed.  Kenneos did an amazing job making my job with that relativley easy and I did my editing touches to give Fumi a smoother look.  I also did some contour embossing to make her pop out.  The demo background I'm using so far (that will be changed to Kenneo's submission and others) is dark already thus works great for this purpose.

Check out the image above to see what I mean and here's hoping I get more time this week to create the different enemy types programming-wise (ones that can be thrown, cut in half, blown away and/or put into combo moves...just to name a few).  Doubtful the game will be released for the 10th Anniversary next month but it should be out this year in honor of this site's decade and hopefully the final nail on the coffin for my day job so I can be working full time with the site, anime.fm, the anime store here, games, anime voice acting and my anime hobbies...instead of rotting like many others are in some office working for somebody else.... Row Row Fight the Powah!