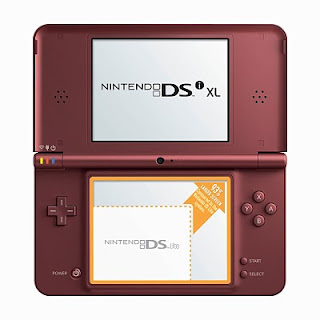 In case some of you haven't heard the news, Nintendo has been doing some advancements in their hardware.  Just released a few days back was the DSi XL... and like the commercial shows, it's like the DSi powered up with a mushroom from Super Mario Bros.  It has bigger screens and is just plain, bigger.  Since I don't have a DSi (just the original DS), I might get this.

In related news, Nintendo also noted that they are planning on having a whole new, 3D handheld system dubbed as the "3DS" that doesn't involve 3D glasses like all those crazy movies have now (and did back in the 80's too...yeah 3D is NOT a new thing).  The 3D capabilities of this might be rather holographic from what the rumors state and slated for late next year (2011).  Here's hope Nintendo keeps bringing out the good stuff  ^_^