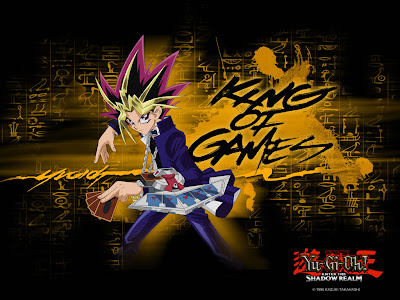 22.6 Billion Cards! That's how many Yu-Gi-Oh Cards have sold since the series' debut in 1999.Once again anime is trumping areas of hobby, comics and games. To be honest, even though I collected (and used to play) Yu-Gi-Oh! cards, I thought that Magic: The Gathering was the lead in sales; especially in my town since there sure are a large number of sad geeks...I mean non-anime card gamers out here on Long Island. With the combination of Manga being the top genre of Graphic Novels/ Comic sales in the US (~45%, most of whom that buy are 13-17 y/o girls) and now this news on Yu-Gi-Oh, many of the very geeky, shut-in American D&D, Magic fans/geeks are hiding away in their mother's basement in total disbelief. (Observe the different crowds at NY Anime Fest and NY Comic-Con, and you'll know what I mean...the CC people seemed to have no souls 0_0)

Anyways... I'll also admit that I did like the anime series though of course the horrors of the 4Kids dubbing, pillaging and maiming of any anime they touch also gave us fans bad memories of what Dic did to Sailor Moon as well as hurt our pride >_< ANN.