The Return To The Shrine (Part 1) 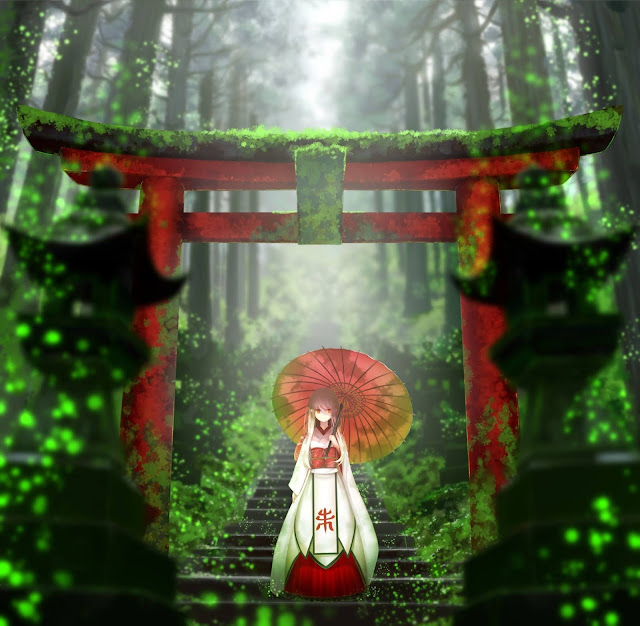 Well, it has been a few years.  Lots has happened and for the past 5 or so years well, as one can see here the site has been rather dormant with little in terms of posts and/or hopes of new content/info.  Hell, seems the last few posts have been nothing but "hey we are trying to come back" or "oops sorry for the delay".  That ends now in this post as there are now tangible items being worked on as I speak.

Some things were said prior posts in regards to this but lots of life changes (mostly positive) happened after what was a fall from grace.  The anime site and store was so close to being the full time gig & center of mine and my wife's (yep, Danielle's finally my wife now and we have a little girl named Yuna).  But, well...that didn't happen due to Hurricane Sandy & things beyond our control from then.   This was followed shortly by the sudden loss of our main artist, Kenneos as well as a big door to anime voice acting being closed for the honest questioning of a very jaded and then self centered western anime voice actor.

That all began in 2012, 9 years ago...and were mentioned in prior posts a bit too.  What happened later was all positive but with a catch.  I got that decently paying programming job I worked 10+ years to prove I was worthy of, a job that to this day has kept me on my toes and without much sleep.  With it came a little bit of the spoils like ability to buy a house.  I was able to marry the woman who has been with me since only a few weeks after the start of this very site in March of 2002, who I was engaged to from x-mas eve of 2007.  A wedding almost always delayed due to a lack of money, a wedding that was to happen in 2013 had the events prior didn't happen...but that job help bring finally in September of 2016.  Another positive was becoming the voice of a popular and award winning dog, Crusoe the Celebrity Dachshund.

The negatives were that my time to do anything I loved outside of programming was brought to a near halt...even playing video games and watching anime.  Up until recently even the time to do much was and has been a struggle.  You'd think with the recent world changing pandemic from covid 19 that I'd be able to finally check off all my items and get things rolling again, but that doesn't come easy when you are the father of a 2 year old and with a demanding job.

However, that job for a while has kept me in the know and sharpening the skills I've had for quite some time.  For years I've been planning the return to all of this and something happened just recently that might finally have the stars aligned and the motivation to return to the hobby, site store and more that was left on the shelf... left to grow the mold we see in this wonderful art piece above that I wish I knew the source to.

In the podcasts that you heard my wife and I on, you heard my distain for a new age of moral panic, not by the antagonists of old, but of a new breed of perpetually offended...by the people who claimed to have once been on the side of our fandom and other things one would say are progressive free and were scrutinized.

Well, the moral panic by a new age of puritans has hit a fever pitch and it would seem that they have come after anime fans, anime / Japanese artists, collectors, voice actors who choose not to participate in this cult without a deity and against all we hold dear.

This isn't new for me, I became an anime fan thanks to my childhood friend Tiago B. around 1996 thanks to a turn of events that can all oddly stem from me getting a Sega CD with no plug (maybe more on that another day); a chain of events that lead to this site and me meeting my now wife (again...maybe more on that too...very Love Hina on that one).  When I was in high school, I was teased by people who hated anime for the reason of it being different and being asian.  I grew to love the aesthetic, the culture, the positives of the habits of the people of Japan, and yes, I married into a part Japanese family too.

The people who teased my love for video games and anime were the "popular types" and the types today who'd probably get canceled to hell for acting a certain demographic they are clearly not.  Professors balked at my wanting to program for video games and at home, the religious right wing were ever so prudish about the sexyness and power seen with anime and Japanese women.

Now, we are seeing it with those who are on the other extreme of the spectrum, people who claim to be anime fans but are anything but.  Those in big industries are attacking video games and particularly now anime...even people in the western anime industry. Gone is my trust in Funimation, CrunchyRoll, RoosterTeeth, ANN and Kotaku.  The latter two I used to get my news from and they used to in some cases with me as well before they blew up in popularity and lost their ways.  These entities mock and make fun of fans and the very culture that got them on the radar in the first place... all too familiar to those people I dealt with in high school.

It's gotten too much for me to bear and hold my tongue.  I try to and will continue to be positive as I can as the community I do represent with my voice acting role as Crusoe is actually one of the most positive communities I have ever seen.  They kind of remind me of the old anime community and old group of anime voice actors who are just there fro the love of the content...not for political brownie points, not for silly scandals and not for anything backhanded.  They are so positive in an internet that has always been a rough place to be but only has gotten worse due to the amount of pointless eggshells one must walk over.  The fact of the matter is, people need to stand up and realize the eggshells and those who put them there are weak if firmly stood against.

What has happened?  Why am I ranting like this?  What's the goal?

Well, the straw that broke the camel's back was what some of you probably are visiting about...the fact that anime figures are now being banned.  This isn't something new (I reported the inklings of this two years ago)...but it has totally grown by leaps and bounds.  Amazon particularly at the moment, but how far will they go?  How much more of an anti-Japanese, anti anime rhetoric do we have to see and hear?  This coming from entities that claim they are "trying to stop asian hate".  Please...we all see you never cared until it made you all look good.

This is why I've had to come back...but this time I have experience and a long yearning for a return.  The world of tech and internet applications has changed a ton and while I was away, I became part of the forefront of it all.  Even way back in 2014, just before I sold some of the last figures on hand form my store, I made it where you can buy with Bitcoin.  Crypto is just the tip of the iceberg and I for the past few years stood at the shoulders as the R&D tech person for brands and businesses that would make all of those blogging companies shrivel with fear in the corporate sphere.

From demoing the Hololens to the CEO of PepsiCo while working side by side with the CEO of MTNDew, to making the 1st 3D ad with Google's team, to the beta testing of Twitter's now retired Fabric, to building a Unreal Engine AR scene for the International Read Cross, to an AR experience for the fashion industry that took up the entire Javits Center (you know...where NYCC is hosted), to a Unity project for the MTA, to even ironically building a platform for chat and web content delivery on Amazon's AWS...I've gone through the trails of fire in tech that most never do.  I own my own house now.  I have resources & knowledge I never had back when I added that anime figure store to this here site in 2008 to a whopping $200,000+ in figure sales.

Amazon and the actions of the new age of the "always offended" have made a bad enemy; someone in industries and tech that their hipster blogs only wish they could compete with.  I have a few projects I left dormant and on the drawing board that I will go into in upcoming posts in more detail but let's put it this way...I'll make sure to add my name to the list of those who won't be stepped on.  There's lots of good for humanity that those with a passion in these forms of entertainment, tech and art can (and have brought) to the table.  The people who cry "I'm offended" are the crabs in the bucket.  Their time was the 2010s...this is the decade that this must come to an end.  You should not be ashamed of your culture, your love/respect for a culture nor your creative & positive hobbies.

The first step...I'm bringing back my anime store.  Will only be small at first but let's bring this back.

Second, the blog here which.. well, yes it's back now but it sure needs an update.

Third: the podcast will return.

Fifth and more... more on those as I create them.  Might be best I don't mention them too much until they are about ready (something I learned well in my work)

Oh, and Google ads...they are going to go away.  For years they said my posts about anime and the various art, tropes, memes, etc are a "violation" on adSense.  That's ok... there's enough sites with site destroying ads.  Those need to go.

My job and being a father is still a ton of work but damn... I feel a new life in me.