The Long Gap, But Not The End 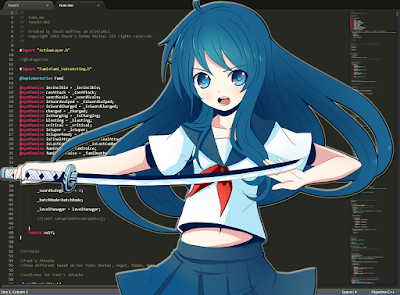 Been a long time hasn't it?  Almost 2 years of nothing?!
My sites, stores and general content has been...let's say nonexistent the past almost 2 years and nothing here on our blog has been updated with much care or order for a while.  Well, that is hopefully going to start changing (hopefully not jinxing it).
I'm finally settled enough in my home to begin what I wanted to do in the first place; grow/reboot my online presence, sites, content and business.  A ton has happened in the past few years.  It was like the life changes that should have happened all combined at once since 2015.  I got a very important job role in NYC as a Lead Developer, I got married to Danielle who's been a part of my life since 2002 and my fiancee since late 2007 and I bought our first home!  Heck, even just these past few months I became the voice of a famous online pup, Crusoe The Celebrity Dachshund, so my voice acting has been keeping me busy as well.  The downturn (and financial issues) my anime figure business suffered by the events of Hurricane Sandy in 2012 are now gone and there is another store site in the works.
The insane number of life changes, 24+ hour project sprints and tasks life threw at me these past few years was beyond tiring so Danielle and I took a week off to Disney in Orlando (the same place we went for our honeymoon). The vacation was exactly what I needed so it's time to get things back on track.
First things first, hopefully more content and to get things going... I'm not going to keep the Anime Figure Bot  in it's "in dev state".  She will now answer questions and eventually move toward being a dynamic assistant to our anime store's revival.
Also, moving forward we do wish to update the site/blog and all to be out of it's 2009 state as well as phase out Google Adsense as well a number of other Google services being used on this site.  Google over the past few years has made their platforms increasingly restrictive on free speech and with ever puritan-like prudish nature.  We are not fans of crazy non-related ads, Google's overall actions and honestly not into much advertising in general beyond what we need to keep the site afloat.
Advertising on this site will for a time stay as I am talking to a number of people who wish advertise here (all anime related) so ads in general will change here.  Down the road we might just restrict advertising to a single Patreon pledge banner, mention of our anime store items and quick sponsors in online videos / podcasts.  This will allow us to keep making content and not worry that attractive, non-pornographic anime art will get flagged by a platform and people who will eventually die out in obscurity by then end of this decade when the next set of outrage culture fiends finds their next mindless topic to waste their efforts on.
Ranting aside, we are not gone and if time stays my friend (and we are not jinxing ourselves yet again) we do have plans for more content and still being a part of the community we've been a part of since 2002.