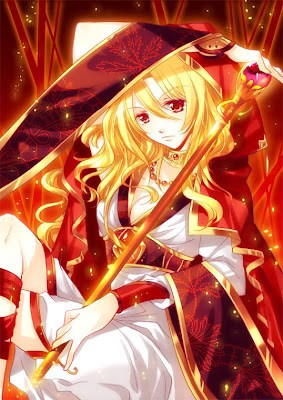 It's been a long time coming but I have resurrected parts of the site and blog that have laid dormant or for some, seems to have been lost in time.  So what's back?  Well, for starters, the Anime Picture of the Day posts!  Looking like the mystical bird of resurrection, the Phoenix, this beautiful anime picture captures the fiery power of red hues.

So yes, Anime Pic of the Day is back...and next week, I'll bring back Fan Service Friday, on Monday expect to see another MoeMonday post, as well as some others from the past and new ^_^

What else is back?

Well, go to the Anime Gallery page and you'll see a rebuild in progress.  The Anime Gallery is returning and they will be better categorize than in the past with wonderful jQuery, HTML5, CSS3 goodness and social networking tie-ins as to modernize a now  somewhat retro web site feature (image shrines).

What happened to the galleries from?  Well, thank the devs at Apple for that mess.  I, like many about a  year or two back were paying for the old MobileMe service.  Part of that service was a dropbox-like gallery feature.  Well, when Apple moved to their iCloud service, they erased the galleries and everything with them >_<  Gone were the cosplay images, gone were the Japanese Idols, as well as pics from anime cons... and gone was the anime picture gallery.  Also, a 3rd part site decided to shut down their feed service, so even the relevant feeds from my blog were erased.   Times have changed, it's easier to create rss feeds with thumbnail images and with my increased knowledge in a slew of web-design and programming languages  I thought it was time to bring back parts of the site and make them better than before.  Also, as you could guess...I plan on bringing back the cosplay and Japanese idol sections as well in this revival and expansion of the site.

The blog itself has been getting some facelifts;  Finally, after so many hours of toiling,  I created a thumbnailed RSS feed section here, showing the latest anime figures and products from my store.  You'd think something like this would have be elementary web design...but it still seems you have to jump through hoops to get thumbnails from RSS feeds (especially if I'm pulling it from the PHP-powered OsCommerce cart >_<)


Currently the galleries now just need some filling in of content but, that's what I'll use the blog here for.

This s also to prep from some major overhaul of Anime.FM  I simply can't let such a good URL sit there as a hardly working blog.