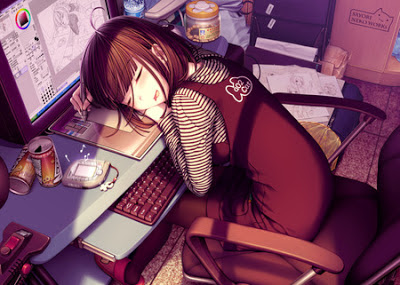 As some of you might have seen, the blog got a little bit of a face lift.  I replaced the old scrolling gallery with this one I use in the anime store.  With it, the blog loads much, much quicker and I'm able to categorize more featured topics.

A couple other things have been changed, upgraded.  The nav bar up top looks and feels much better and now encompasses many more links than before without using too much space (of course, that's what a common drop-down nav bar can do ^^;;)  Both the new nav bar and the new featured menu utilize HTML5, CSS3, and jQuery.  People with IE7 or earlier might run into some issues but Chrome, Firefox, IE8>, Safari and Opera users should be abe to see these fine.  Granted, I probably could spruce up the nav bar a bit with some better internal backgrounds and maybe some little icons for say Twitter and YouTube, but it's a start.

Many more links have been added but as stated earlier...lots of the photo content sections got ruined from Apple moving from MoblieMe to iCloud... and not bringing the damned iGalleries with them -_-.  As soon as I can, I'll restore them with either Flickr or Picasa libraries...so the anime pics, idols, etc will be coming back.  Anime Sanctuaries, a kind of wiki and throwback to the anime shrine of old is also planned to get some dire updating and filling in of content long overdue.

If any of you have been with the site long enough...you'll see me featuring my old Sephiroth Vs Mogs Flash animation that got (semi)popular on Newgrounds, almost 10 years ago ^^;;  Well, I'm getting back to making Flash animations asap and yes, I plan on eventually making the sequel to that animation since well, I sure as hell left people hanging with that and I think it's my obligation to continue that series.  Newgrounds is still very viable for animations (and actionScript games) plus, as a YouTube Partner, I can utilize YouTube with more original content I've been dying to Completionist get back to.  Thanks to Danny Choo and even more recently, NormalBoots team (JonTron, PBGamer, The, Continue? Show, Egoraptor (I remember him from when I was putting stuff on NG) and GameGrumps), I've been inspired to make some video game related videos.  I'd like to do some Let's Play vids and try to come up with some original game-related videoshow clips.  Basically, my own show on youtube...been a gamer since 1985 and an anime fan since 1997...so I think I'm long overdue to join the rest of the people in my generation dong this stuff on Youtube.

But wait, there's more.  A few posts ago I uploaded a Windows Games/XNA tutorial that could work in  the older Visual C# 2008 / XNA 3.1 environment.  Reason being, in case you see my tweets and FB posts, is since I'm working extra hard to get a position at a video game company in the city.  So, not only am I working on my Tenshi-Oni game for the iOS (and hopefully later on Android)...but I'm actually going to make some smaller games in Windows XNA.  I already have one in the works that I'll give out for free and make as a pre-curser to the first release of Tenshi-Oni.  Heck, all of this programming stuff, though making me tired like the top pic here, is an effort to get out of my current, underpaying day job and to b where I should be with the varied skills I have...that aren't being utilized well at that camera store I go to during the day when I'm not shipping anime figures and programming anime angels and demons.

Since I'm dabbing in so many topics and development tools (I'll list them below)...I also added a better category tab section at the top of the posts on the main page.  This way, I can also blog more since, the blog needs to ge back into gear as well and there's always so many anime figures, anime news, gaming news, things on my mind, etc to talk about.  Non-anime/game memes, etc, I'll post in my pot-luck blog, charlesgaffney.com (site needs some updating too ^^;;).

Oh, and lets not forget Anime.FM... I didn't forget about that site.  I have big plans for it and my recent foray into HTML5, CSS3 and jQuery will be of aid in that project.

Here's' a list of programming languages, environments and tools I'm working in...so in other words, I'm doing what I should have done a long while ago, add lots more content!

(edit: forgot to mention... the Disqus-powered comments have been upgraded too.  Really sorry for the comment system over the years being changed around.  Blame google changing things around with blogger over the years for that -_-  Hopefully with Disqus, the comments will stay here on the site and of course give it more usability.)