Where the Hell Have I Been? (Part 2: Hurricane Sandy) Didn't mean for another hiatus in the blog and for the updates with the anime store (and my planned site upgrades) but Korra here got too mad about Star Wars being bought by Disney, went into her Avatar state and now Long Islanders can't find enough gas to hoard in order to go back to their usual, needless, manic runnings arounds & staring at the even less impressive mediocre/overpriced beaches.  Ok, in all seriousness, this past week has been nuts and it did turn life upside down for myself and others here.  I used to want to be a meteorologist for a good while in my childhood and when I saw what the hell odd "Frankenstorm" Hurricane Sandy became... I joined the rest of the meteorological community who simultaneously thought somebody divided zero... causing not only a strong, late season hurricane but a freaken storm that moved west into the northeastern US.  Basically the worst possible angle any storm can do to the NYC area.

Where I got hit wasn't too bad though in comparison to people west of me.   I live in central/eastern Long Island but as you people can see, Sandy did alot of damage in an area not used to many hurricanes (yet we are now 2/2 for the past two years).  I was out of power for days and even as I type this, there are 400,000+ people just here on LI still without power.  We also practically ran out of gas...and that's not good for an impatient and generally incompetent area of the country.  Honestly, if there ever was a zombie apocalypse...Long Islanders wouldn't make the first day...these are people who are seriously not able to handle being inconvenienced by a storm or anything for that matter.  People in lower Manhattan, Staten Island and New Jersey have much, much more to complain about with the aftermath of Sandy...it's heartbreaking to see what my neighbors in the tri-state area have to deal with and the loss from this odd storm.

Another bit of news that lead to my being away again and the reasoning for posting that XNA bit just a few moments ago is that I'm really on the move when it comes to my dayjob situation.  Yes, I still have the anime store business but when I learned that the web design work I currently do for my current day job is not just underpaying ($15/hr) but massively underpaying me...I decided to take action and try to replace it with a much, much better paying job in NYC.  About 3-4 weeks ago I was interviewed by an IT recruiting firm and thanks to a good friend and customer in my anime store...I'm trying to become a video game programmer for a game company in the city.  My resume was sent in last Friday, just before the storm... 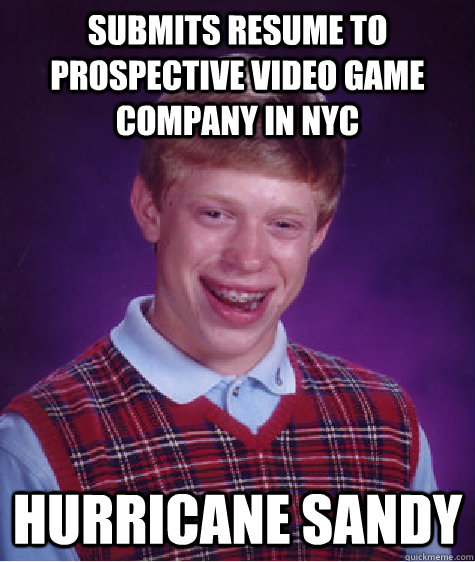 ...until today that business was out of power due to the storm.  My current day job...the one that pays web devs $15/hr... was out of power for most of the week and now the boss there is slating cuts for even next week...thus making the need to move on to greener pastors more dire.  I am trying to get web dev positions but this game dev position is what I'm really aiming for...since, well... I got my Computer Science degree back in 2005, before game dev education was taken seriously, because I wanted to code games.  I'm not up to coding for some boring financial firm or doing underpaid web secretary work like I do now for a company that doesn't know the difference between email and gmail and feels that anything involving computers is your fault. Seriously...if you are computer illiterate in this day and age..stop...just stop, and now look in the mirror...cry, take a deep breath, cry some more, get some humility and then get your ass to a damn class about this stuff.  I mean, the owner of the place I currently work for, that camera store that starts with a B, emails me from his iPad...asking me what we sell products for on our own damn web site!...then the next email in his thread of brain-cell killing stupidity is "what does, x website sell y product for?" By His noodley appendages, it's like watching Mitt Romney try to drink a glass of water...

As one can see...I need to change my employment situation and fast, so right after the power finally got back online and after family stopped using me as a taxi...I got my feet running trying to be prepared to be a game developer in NYC.  The company I'm aiming to work with deals with XNA, Xbox Arcade, Games For Windows, and now Windows 8 games...so I'm reteaching myself Visual C# and refreshing my XNA knowledge   Thankfully, my year+ development of Tenshi-Oni on iOS/XCode is making this process much, much easier.  I'm actually rather excited with the chance to work in this field with Windows game dev in addition to the iOS dev I've been teaching myself.  Also, as one could guess, this field can pay more than even the 3x-better-than-silly-camera-store-web-site-$15/hr-job web design positions I've been asked to be a part of.  So, with a cup of coffee, maybe some XS energy drinks and little sleep...it's time I make CAS HTML5/CSS3 compliant, fix up my anime store, restart my youtube page and hell, maybe even get back to making AMVs and Flash animations.  I think that Sephiroth vs Mogs animation left way too many people hanging 9+ years ago ^^;;  I got to at least tie some knots before HL3 is finally announced and made.