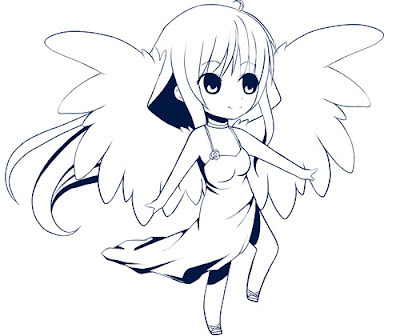 Kenneos is hard at work with many commission images and in her spare time, she's been gracefully helping us out with graphics for the Tenshi-Oni game (and Eefi's been helping too ^^)

She is currently working on the in-game graphics for Angel Fumi...and she's probably going to be more attached to this version of the game's protagonist....that's because I'm going to let her be the voice of her as well ^^

Check out her Tumblr page here.

The game is finally being programmed again and I'm currently working on Enemy AI and death reactions/animations...but I'm almost up to the point where I have to start adding some enemies, stages and also the voice work.  Mainly reaction sounds and quick lines to start but already my fiancee Danielle has put her voice in as the "Start" opening sequence (and she made the music).  My friend Madi who was with me at the Anime voice acting classes with Bang Zoom Studios will be Demon Fumi.  I'll of course put my still rather green experience in the anime voice booth to work and be the voice of any enemies, the Chuck Doll and Thomas if I can get him in the game.

Here's the current (but tentative) voice-over cast for the game:

Sadly, doesn't look like the game will be done by March at this rate but I'd rather do it right than make it a rushed mess when it first appears on the iPhone app market.  After about a month / month and a half hiatus, it's back on track ^^