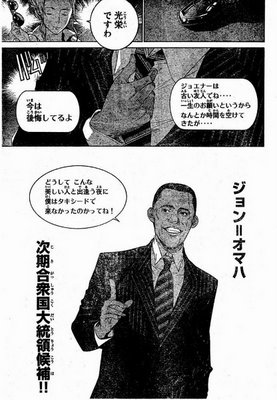 Ok, I just had to get this off my chest. For the most part, many of us American otaku could care less about politics, myself included. If you follow the news at all, we all know that we are less than 60 days away from one of the biggest elections in American history. I was born on November 8th, 1983 and that actually was Election Day then so I guess I should mention this upcoming Nov.4th benchmark date. Granted, like many otaku, I'd rather take a plane to the land of the rising sun and avoid the countless stupidity that America has shown so far in the 21st century. In the global arena, America is like the annoying drunk at a party with his pants down shouting "I am the greatest!" yet you know that he just soiled himself and probably doesn't have the money for the taxi back home. As someone who lives in one of the most anal parts of the US, New York's, Long Island, I've come to see all spectrums of the American people from the ass-backwards over-religious conservatives who would bring the second coming of Christ, burn all science and logic documents, and make sure we all are one color and race..to the elitist, wine smelling "I'm better than you" types of people. Lets face it, you don't have to ask an Otaku twice that America needs change. Both candidates are shouting this and its expected in every election that goes on in this nation.

The main issue though, I feel, that is the root of the American problem is actually something that the country can't seem to grow out of, which is sadly the conservative, mainly Christian fundamentalist take on reality... a statement which in itself is an oxymoron. In this time, more than ever we need to look to the future and drop the crap of the past; something a religious fundamental person can't shake free from. As American otaku, we have fallen victim to such garbage. Remember how bad Sailor Moon, Dragon Ball Z and other anime was beaten to a pulp and filtered for kids by American censors? Vegeta did not blast enemies to another dimension, he freaken killed them! At times in the series he punched his fist through others and also decapitated them. It's this Christian Fundamental fog of judgment that made them think, "Anime is just cartoons and cartoons are just for kids." It took till really about last year for the true uncut Dragon Ball Z to be sold here in the US on DVD, which is 10 years after they were first aired in America and 20 years after these episodes where aired in Japan. Yes, for some of you that didn't know, the Boo Saga ended in Japan in 1989, hell, GT ended in 1995.

Now that is just one example on how we gamers and otaku have been given the short end of the stick here because of this ass-backwards mode of thought. I don't believe kids should be subject to violent and adult material but you don't take a work of art (anime) and bastardize it because it doesn't mention enough about God, Jesus and the 10 commandments. Showing kids the countless lives and societies lost from the conquest of the Christian, Islamic and other fundamentalist religious groups is something these people also can't show due to how graphic and wrong it is. So even they have to water down their own history and facts. One of the people who all us Otaku and especially gamers love to hate was one of the, if not the main host of the Republican Convention that ended last night, Joe Lieberman. Lieberman is Mr. Anti-Video-Games and Mr. Anti-Anime, if you don't believe me, look it up...the ESRB ratings are all from his wining about the game, Night Trap...just as an example. If given his way, everyone from 2-32 would be only allowed to watch Veggie-Tales on their TV with their thumb up their ass. Just hearing that this guy almost was the Vice-Presidential candidate for McCain made me want to pack my bags for Tokyo and thus why I had to stand up and ramble on like I am now.

To make matters worse, it really does appear that McCain will be the next George Bush, which will also not be in anyone's favor in this day and age. For the first time, as of the end of last year, I actually went and registered to vote. At the age of 24, like I said, I never cared about politics and like many of you, I felt that no matter who wins, nothing will get done. I feel though that at least with Obama winning the election, the country will tip in the right direction (and not that kind of right, thankfully) since we will have someone who is young, new and doesn't seem to have religious idiocies clouding judgment. He seems to have just common sensical morals of decency that all religions talk about yet many of them historically never followed.

Now before you go and state that I'm some anti-religious atheist, I'm not. Religion has its place in the world but as a nation here in the US and in many parts of the world, people need to come to terms that its the pushing of these beliefs instead of using such noble moves as the Law of Attraction through kindness of others, non-racial and non dogmatic acts of common sense to better their religious group. History has shown that fundamentalist religious groups have been the cause for 90% of all wars and the slowing of humanity's progression. As for us Otaku here in the US, more of this type of thought will cause the so-called leaders in Washington to pass legislation to limit anime, anime figures, anime conventions and videogames. We have seen it already and if more of these types of people are in office through McCain's election and have too much of a say, expect more of your rights to be taken away as otaku. I'd go as far to say a world like Code Geass wouldn't be too far from the truth with us being Britannia because of a tyrant leadership. Of course, don't get me wrong about the US and world's major issues like the economy and terrorism, if you read my other blog, you know how I talk about those topics. The reason why I point out the chance of us as otaku losing our rights to view unedited and unamericanized anime is because history goes to show that its these minor topics that are the ones that actually get laws put to them to make the government look like they are doing something even though they are ignoring the major issues. "Well, a 2 room shack on Long Island goes for $500,000, banks won't give loans above $50,000, taxes are through the roof, there's no health care system, high-priced schools teach kids to be nothing but cubical-slaves and even then there's no jobs for them to sell their dignity to for a paycheck but hey, wait..looks like Joe Lieberman just sent a bill to Washington that banned the anime "Candy Boy" because it showed signs of incest lesbianism and it passed. So glad to see they are getting rid of gay stuff because that is the most major issue to the American way of life. Go US government!" (obvious sarcasm in the last part of my little "for instance" there).

As a fellow American otaku, if you are like me and didn't vote or registered, do so and I'll be supporting Obama. I'm not one to force or say who you should vote for, an act that would be making me like the religious nuts who want you to read a bible or be seen as useless, but to me Obama is the correct one of the two. Oh, and yes that's a picture of Obama from the Air Gear manga. Below is yesterday's Daily Show and Colbert Report episodes. If you are not scared of McCain winning the election...view these episodes. If you didn't get the point of this very large blog post.. I, Chuck Gaffney, owner of the anime store and fan-site Chuck's Anime Shrine, support Barack Obama for President.