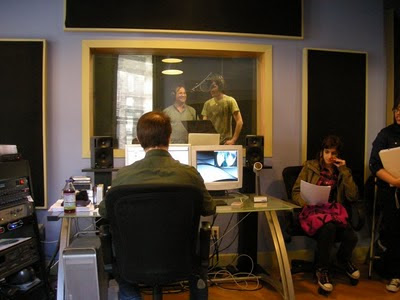 Came back from a wonderful weekend attending two classes of Bang! Zoom! Studio's Adventures in Voice Acting over at Edge Studios in NYC. Me and some very talented new friends of mine got to do professional practice anime dubs and hang out with a legend in the anime business, Tony Oliver.

There was much more than just dubbing anime with the legit system used in the industry. We got to learn the basics on how to create a character (acting 101), the process of anime voice dubbing, video game dubbing and pre-lay (non-anime animation) and the science behind it all. Yes, there is really a science and technique to it all, from the correct breathing, to the various placement of your voice, the acting, the "music" of your voice and making sure you don't hurt yourself by putting the voice all in your throat.

The human voice is a very advance and diverse instrument and these classes helped me find some of what I'm good at and what I need to improve on.  It's been about 8 years since my days in select chorus and voice clases so I definitely had a recap.  tony was a very, very good teacher.  He never made anyone feel bad when he told of the corrections they needed to do and everyone there got better at the end of the day.  Both days we had some fun and funny dubs that were mixed right in their with the legit music and original voice actors, particularly one with the hot dog scene from the Sakura Wars game.

It was a bit tiring too.  I took both classes so I had to take the 7:00am train from my home in eastern Long Island to make it to the 10:00am to 6:00pm class, then the train back home both Saturday and Sunday ^^;;  Just the early morning and the excitement made me more nervous than I usually am, plus we have Tony Oliver, the voice of Rick Hunter in Robotech, Lupin III, a ton of other voice as well as being the executive producer behind Mighty Morphin Power Rangers direct us in voice acting.  My days in Amway doing speeches in front of people, as well as my current anime business helped me drop much of those fears and lack of confidence in myself but i seems that crept up a bit this time ^^;;

Despite the bit of nerves I was trying to fight, Tony did state that I have the right voice, particularly my higher younger voice I practically made up that day.  That was a surprise to me since I'm normally a lower, deeper sounding voice.  The rest of my fellow classmates were just stunning as well and it was so cool doing dubs for series like Gurren Lagann, Haurhi Suzumiya, Ghost Slayers Ayashi, Lucky Star, Sakura Wars, Rurouni Kenshi, Magna Carta 2, as well as a voice skit with a series Tony wrote called Family Rangers (which I had the lead male role in ^^;)

I found that I didn't do so well as Kyon from Haruhi, mainly because I tried to deepen my voice. I found my normal voice sounds similar to Crispin Freedman's version and I should have went with that.  I did very well though as Yukiatsu from Ghost Slayers Ayashi once I began to fine tune my acting and voice.  The next day I did the role of Simon from the end of Gurren Lagann (a big spoiler for me since I only saw up to ep.7 from the series) and it was cool to have Tony directing me on that one since HE was the one who did Simon's voice on that scene. 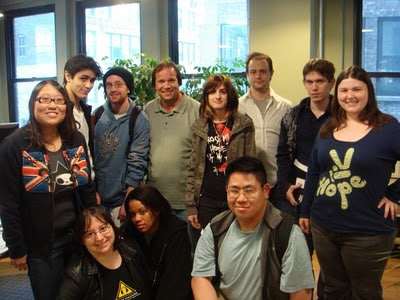 (group photo thanks to Madi, check out her album on her FB page ^^)
So, am I on track to be an anime voice actor? Yes, I am.  The benefit of a studio doing a class like this was that some of our bits were downloaded into Bang! Zoom!'s talent pool and any one of us could be asked for an audition from there. Actually one of the previous classes ended up doing the legit dub to Magical Girl Lyrical Nanoha, so just from there, there's a chance you could hear any one of us in an upcoming anime.

But....it's not just that simple.  I do have to practice various voices to put on a demo and to do it right, the demo has to be from a studio.  From there I send the demo out to FUNimation and others and hope for an audition. If I pass an audition, which many professional voice actors only make it through about 15% of, then I'll have a role in an anime.  This is the reality of the business plus anime doesn't pay as good as say a TV commercial but hey...I'd gladly do a voice in say the dub of Sora No Otoshimo (when it eventually comes) at the current pay rates and it still pays more than the part time day job that keeps me from being a full time anime store owner -_-  I'll most likely be making a trip to Burbank CA to get that demo done though.

Already I might be doing voices an upcoming youtube original animation as well as some audio book work in the city to continue to get my foot in the door and up as a voice on a future anime and or video game.  So you all might actually be hearing more of me ^^

(I also can't stress enough how awesome everyone else was at the classes.) 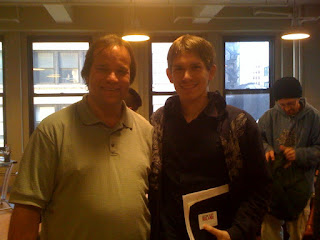 (A pic of me and Tony with my crappy iPhone camera ^^;)
Be sure to check out Bang! Zoom! Studios main site.  Also, if you want to be in voice acting, particularly in video games, DO attend these classes; you find out exactly how it's done (the three BEEPS are still in my head ^^) and you will know from these classes if you really want to do it or not.