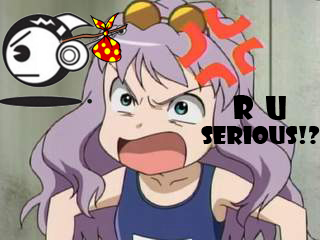 Well, you guys heard of this a few days ago, but for those who didn't hear the news, Tokyopop is closing it's US operations next month.  I did go into a bit of a rant on Twitter at first blaming the scanlation sites...but I want to elaborate on that.  Yes, scanlation sites are part of the issue to why manga is not (entirety) selling in America like it did, but here's a list of other reasons which are probably more of the reason to the loss of Tokyopop:

The point I'm getting with this is that there are anime fans buying manga and merchandise but some in the industry fail to see this.  Some of you though might be questioning why I don't stock much manga in my store if that's the case. Well, that can be answered by the issue of stiff competition and terrible price points of manga. The average $10-$12 might cost me $5-$6....yet stores like Walmart, Amazon directly and other sellers might sell them for $3.  I'm all for getting fans a good price on items; but with the big companies getting manga at $1 or less when I pay $5..that's hardly a way to run a business; thus this explains why I for now still focus on the figures.  To fix this, the manga industry should take on MAP (Minimum Advertising Pricing) policies and allow refunds (a process called Price Protection in the industry) when that MAP price goes down to suit the fans and the depreciation most manga and graphic novels (and DVDs) go through.  This would help smaller companies like mine make up for the void left from Boarders.

I know that if I can get my anime business up to par, I'll start buying some shares in these bigger companies and get my word out.  Anime fans are always here to stay and it probably will take anime fans to keep the industry going, even if someone like me has to force feed it to them on the corporate level.  I have some clout now but $ is the ultimate way to gain clout with any industry and hopefully some of us can get it through the thick MBA skulls of the so-called "business-managers" that there is a viable fan-base here in the US; always has been and always will be.

What will happen to titles owned by Toykopop after this, one could only guess.  Some will most likely be bought out by other companies like Yen Press and Viz, others....well,  I won't blame you for pirating then.

Anyways, here's Stu's excuse letter to the fans after the decision:


Dear TOKYOPOP Community:
Way back in 1997, we set out to bring a little-known form of Japanese entertainment to American shores. I originally named our little company “Mixx”, meaning a mix of entertainment, mix of media, and mix of cultures.   My dream was to build a bridge between Japan and America, through the incredible stories I discovered as a student in Tokyo.
Starting with just four titles -- Parasyte, Ice Blade, Magic Knight Rayearth, and, of course, Sailor Moon -- we launched MixxZine, aspiring to introduce comics to girls. These four series laid down the cornerstone for what would eventually become TOKYOPOP and the Manga Revolution.
Over the years, I’ve explored many variations of manga culture – “OEL” manga, “Cine-Manga”, children’s books we called “Manga Chapters”, the Gothic-Lolita Bible, Korean manwha (which we still called “manga” at the time), video game soundtracks, live-action films and documentaries, anime, and various merchandise. Some of it worked, some of it didn’t – but the most enjoyable part of this journey has been the opportunity to work with some of the most talented and creative people I’ve ever met.
Many of you also allowed me the indulgence to not only produce works but also to take a swing at creating some of my own. I’ve learned that it’s much easier to criticize others than it is to create from scratch – but in doing so, I’ve also in the process learned how to better communicate with creators.
Fourteen years later, I’m laying down my guns. Together, our community has fought the good fight, and, as a result, the Manga Revolution has been won –manga has become a ubiquitous part of global pop culture. I’m very proud of what we’ve accomplished – and the incredible group of passionate fans we’ve served along the way (my fellow revolutionaries!).
For many years Japan has been my second home, and I have devoted much of my career to bringing my love for Japan to the world – and hopefully in my own way, I can give back to the culture that has given me so much joy.
In closing, I simply want to thank all of you – our incredibly talented creators from all over the world, our patient and supportive business partners and customers, our amazingly dedicated TOKYOPOP team – full-timers, part-timers, freelancers and interns, and of course the greatest fans in the entire world. Together, we’ve succeeded in bringing manga to North America and beyond.
Arigatougozaimasu!!
Stu Levy
Founder, TOKYOPOP