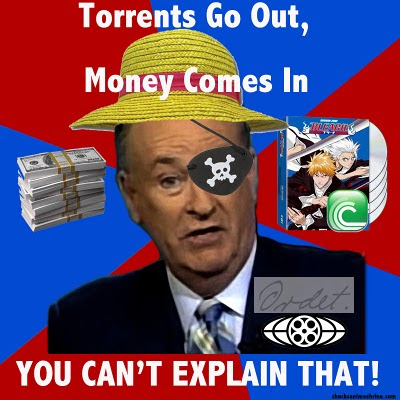 Anime pirating and fan dubbing isn't as evil as the execs/producers of studios say it is.

What us fans have known for years has finally been studied and proven true by Japan’s Research Institute of Economy, Trade and Industry (RIETI).  They stated from their studies that not only does pirating and torrents prove harmless to the anime businesses...they actually HELP the industry.

Here's the info from the myce.com post ,  the paper on the study found here.

"The study examined 105 anime episodes that were posted on YouTube and Winny, a Japanese peer-to-peer file-sharing program. In the case of those posted on YouTube, researchers found that the illegal copy had no negative impact on either the subsequent DVD rentals or sales of the program. Winny, however, did negatively impact the program’s DVD rentals, but did not, in fact, cause a decline in sales of the DVD.

“Youtube’s effect of boosting DVD sales can be seen after the TV’s broadcasting of the series has concluded, which suggests that not just a few people learned about the program via a Youtube viewing. In other words YouTube can be interpreted as a promotion tool for DVD sales,” the researchers state in the abstract of their paper."
I'll also put my 2 cents in here as both an anime store owner...viral marketing boosts ANY sales.  If you do not understand the power of free viral marketing..your company will die in this day and age.  Holding on to localization, embargos, licensing clusterf%^s or any other old hat business models; expect sales to fall and don't blame piracy for your shortcomings.

To this day I get people telling me that the AMVs I made way back in 2003 are what got them into anime.  I was going to set an entire blog post for this bit of news but I'll let this out here;  my total sales for 2010 in my legit anime business was about $150,000;  the highest sales year I've ever had!  I still feel you should pirate as little as possible if not at all, but if a series or figures are stupidly "kept in Japan only until the licensees determine when gaijin can see it", obviously there's really no other way for you to buy what you are looking for.

Listen, anime studios and figure makers, I'm talking to you as the front line to your profits and sales;  yes the economy has been rough, yes there has been some changes to media that has made whole studios go out of business but instead of pointing fingers at the hands that feed you (Like with the completely heinous act of forcing Funimation to sue torrentors for One Piece and Fractal); look in the mirror and realize why YOU are why your sales might be down.  As the UK’s Strategic Advisory Board for Intellectual Property Policy stated in their own similar study with music and video content, your numbers are “insufficient in order to make a case for copyright.”

Anime studios and figure makers, again I'm talking to you.  You do realize that the US dollar has lost to the yen right?  2+ years ago it was 120 yen to $1...now it's 80 yen to the dollar.  As somebody who has to wire over 500,000 yen at a time..I feel it and the fact that Japan's government won't weaken the yen is why you probably don't see that extra yen to you.  Also, you need to realize that anime fans exist world wide.  The more you do shit like this (GSC not letting non-japanese anime stores and customers nab the amazing new Wonfest 2011 figures) or the more you prevent any anime series to be dubbed/sold world wide, the more you will see fan dubbing and pirating.  Is our money not good enough for you?  I have a number of customers who are begging me for those items but I have no way to get them...you won't let us buy them.  How else are my customers able to get the anime they want to see?  They are willing to pay for it but you won't open the doors to them.

Here's some other cost cutting measures:
How about your execs?  I'm certain some of them make more money than they should.  How about the whole licensing situation?  The thousands upon thousands of dollars (100,000s of yen) that's basically used to "insure" copyrights and gets shared by a number of companies in what by diagram can be viewed as a genuine clusterf^*#?

You all relize that in this day and age the content creators can run everything from start to finish and own all their rights and command their own items now, right?  (Look at Cenceroll, iPhone apps like Angry Birds as an example)  Again, don't go crying about sales drops (and exaggerating the numbers) and blaming pirates.  I do implore anime fans to make sure they buy their anime one way or another...but they are buying it and that's not being stated.  Instead, the "woe is me" card is being passe around.  If a series is good enough, people will buy it. They might pirate it and then buy it...but the end result is what you all are looking for and what I look for as well as a retailer, blogger, webmaster and fan.

Here's the video from yesterday's G4 Attack of the Show video on this news.

Sorry Sara Underwood, though the general US public is cheap, and derpy and yes would probably just pirate;  American anime fans are not your typical American and they will buy their anime.  Keep pretending to be a gamer, geek and anime fan like the rest of the G4 crew...one day people might believe you.