Despite Delays, There is Progress 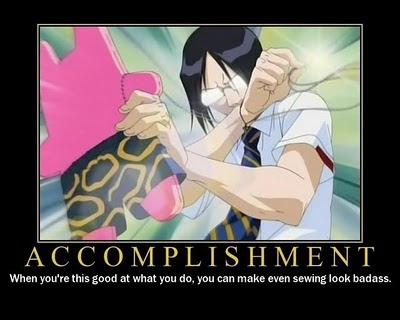 I'm convinced...life is out to beat the living pulp out of me..more so seemingly than the average person.  Be it luck, fate, or something else, it seems like the more I try to move my anime site and business forward, the more everything other than this anime site gets in my way.  Add a terrible flu bug to the mix of tasks, headaches and todos delaying my posts and dreams.

No matter, as said in Gurren Lagann, "Row, Row Fight the Powah"

I just need to keep trucking, keep moving and keep sending out anime store orders while (still -_-) working a damn day job and ever wanting to do more for this site.  Yes, there is yet another gap in blog posts, yes, there are parts of this site needed to be added and updated...but I've already completed my training in learning Objective-C and now I'm in the stage of making iPhone games with the goal of making the project-Fumi game after all this time.

As for the voice acting gig..instead of waiting so long to get a studio t do my demos...I'll make my own for now.  It's better to have demos, do my own original voice work (and maybe have a cameo in a TFS flick :3 ) than just keep trying to save the $2k needed to get a studio to do the demos....that can be for polishing it.

Instead of waiting for the right moment...it's time to just get the tasks done.  Years seem have gone by while waiting for the right moment to do many of the things I've set out to do on this site.  I've accomplished much but I've grown tired of making inflated promises....so watch in the next few days for some interesting new things....yeah I've said this a few times but this time..I mean it -_-