Is The PVC in Anime Figures Toxic? 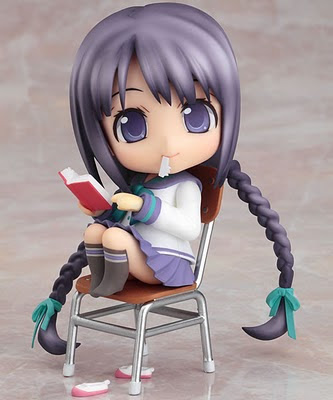 Polyvinyl chloridem, aka PVC, is a substance used in not just anime figures, but in many items from siding, fencing, computer cords and wires, as well as various car parts.  Today CNN put this scary and rather misleading article on PVC right slab on their from page.  There are truths and some exaggerations in any scares about PVC.  Let's clear the air about it.

A while back I posted an article about poisonous bootleg anime jewelery, complements of China and the anime bootleg capital of the world, Hong Kong.  Those items had very high levels of lead and other chemicals, but even with their high levels, the only way to get poisoned would be to keep the items in your mouth for a descent period of time...though some people do put necklaces and such in their mouth as a nervous tick and is indeed a health issue to worry about.  Either way, those items have thankfully been banned at the dismay of  the Hong Kong bootleggers.

But what about PVC figures?  Well, polyvinyl chloridem, when created or burned, creates toxic byproducts in the form of dioxins.  In other words, in order for that cute Nendoroid figure to suddenly turn into a little chibi bringer of cancer and death...you have to practically burn it and inhale the gas.

I'll be frank, I'm an anime store owner and this news could effect my business (as well as countless others)..but only if people take it the wrong way and get freaked out by it.  There is much fear out there over everything we use, eat and interact with.  Did you know that your water bottle seeps out a bit of oil toxins from the plastic it's made out of?..or that your iPhone probably is sending out microwaves that can be harmful if you hold it against your head 24/7?  PVC, like any building material needs to be treated as such, a building material.  Those who make it need to keep themselves safe from the toxic byproducts of it's creation and us consumers...should never take the material, burn it and inhale their fumes.

Just have some common sense... don't suddenly think your computer mouse, the siding on your house, and your anime figures are out there to kill you. The fast food we all put in our mouths here in the US is far more toxic than some cute anime figure girl...1) because we are not suppose to eat PVC and 2) because our fast food has become far too abundant and socially acceptable to just intake with no remorse.  Now if a factory making PVC doesn't get rid of the toxic byproducts in a correct and safe manner and they let the toxins cause say an anime figure to be toxic at the touch (or smell) than those factories need to be shut down and those products recalled.