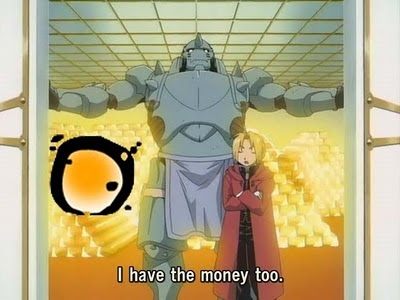 Looks like Bang! Zoom! better get back to dubbing or they'll miss the boat despite what their fearless leader declared last week.  Don't get me wrong, I like Bang! Zoom!  About 2 months ago I was at their wonderful voice dubbing class run by anime voice legend, Tony Oliver and within a year's time, I'll be flying over to Burbank and dropping $1500 to them for a voice demo so I can maybe be part of the anime voice acting celebrity group.  But..don't go around stating that anime is "going to die" especially when you are a part of the business.

Anyways, on to the story...

As of an ANN report today, Crunchy Roll announced that they have been profiting 40% more for the past 5 months straight!  That's amazing for ANY business in this economy let alone a so-called "dieing" industry.  Crunchy Roll was clocked at 1.3 million unique visitors to their site.  To put this in perspective, that's 10 times more traffic than even FUNimation at their 150K visitors. ( I'm at around 5K btw ^^;;, sigh)

So is the anime business dieing?...this is a big NO.  Are fandubs and subs hurting the industry, yes but like anything in the entertainment industry, you don't get fans what they want, they'll get it any way possible and anime fans are the smartest group of people you'll find.  It's up to the dubbers and licensees to be smart in what titles they bring here to this part of the world.  My anime figure business alone has been doing between $70K and $100K a year in sales for the past 3 years with it expected to jump to about 1/4 of a million dollars in the next 2 years.  With this news about Crunchy Roll doing great, I'll probably better get talking to some contacts in Japan about what more I can do here on this site and of course on my other site that sure as hell needs to get of the back burner... Anime.fm.

Congrats to Crunchy Roll for showing that you CAN make money online with anime and here's to more anime that I'll hopefully be able to be dubbing for in due time.