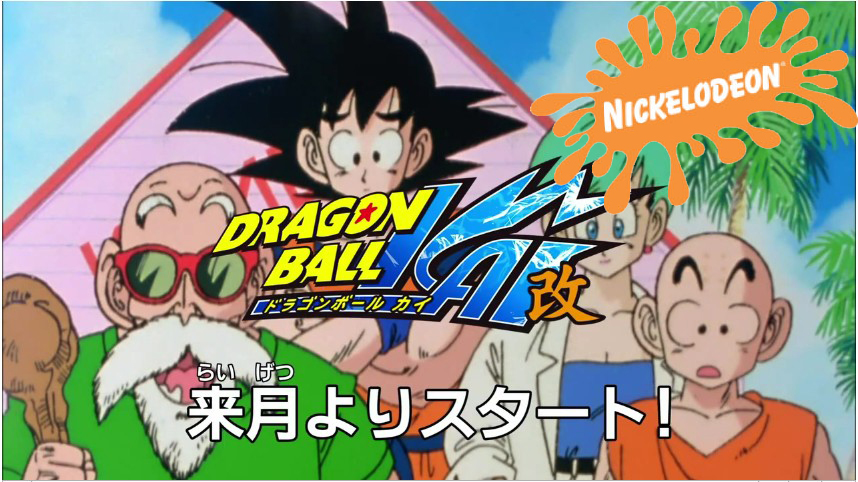 Nicktoons will be airing probably the best cartoon to date on their lineup (ok Ren & Stimpy and Invader Zim need some creds). In case you haven't heard, Dragon Ball Z Kai will be airing on Nickelodeon starting in May. The days of anime on Nick haven't really been around since the mid 80's back when I used to watch Grimm's Fairy Tales and The Mysterious City of Gold. I remember being about 4 years old and 6-8am on Nick was a very interesting stew of odd pre-Nicktoon American cartoons like Count Duckula mixed with badly edited-for-US-audience, old school anime like the two I mentioned.

Anyways, the part my little trip to the past that links to this new DBZ info is that the days of over-editing anime for the "kiddie" audience is back in full force. Ninjas will "sweat" and "faint" when stabbed with a knife on the Disney XD airing of Naruto Shippuden and expect to see the revival of the "blasted to another dimension" reference when somebody "dies" in DBZ Kai from a ki blast. Granted, it IS FUNimation doing the Dragon Ball Z Kai dub so, it's uncertain if they will follow in the old "kiddie" voice edits from the Ocean Dub days.

Though this is a WTF moment for us hardcore fans. It is a good marketing scheme for FUNimation, Toei Animation, the DBZ franchise, anime stores like mine and maybe for the revival of anime into mainstream again (without the help of CNN promoting Rapelay -_-). Of course, if you want to see the series un-cut and in their best forms..Buy the DVDs and Blu Rays. Things will get silly when the editing comes into play..believe me.

As for the people over at Cartoon Network...expect the execs to probably hang themselves in due time for missing out on now 2 HUGE franchises to other networks. A commenter on the Dragon Ball Z Kai Nicktoons commercial below said it perfectly that Cartoon Network has stupidly abandoned anime for "window-licking" cheap live action and Flash animation homegrown shows.

Yes, it was Adult Swim that brought Family Guy back to life x10 and the ratings of Family Guy for some time destroyed the ratings of even the best anime...but, lets be honest Cartoon Network, I'm speaking to you now; Anime fans are not like American animation fans. We stay loyal to a series all the time. American animation fans are very many but the ratings are fleeting since the American mainstream is rather flaky and not very focused. When ratings fall from a show even as cool and funny as Family Guy...it's a major fall. Major and minor anime series will have a constant viewership that will always be $ in the bag for you and your advertisers.

As both a business owner and a major anime fan, the move by Cartoon Network to abandon anime for cheap, home-made live action and mainly amateur animation (minus FG and Venture Bros.), will be your greatest downfall. I'd fire your marketing team right now for some people who actually know what they are doing. You guys missed out big...again.