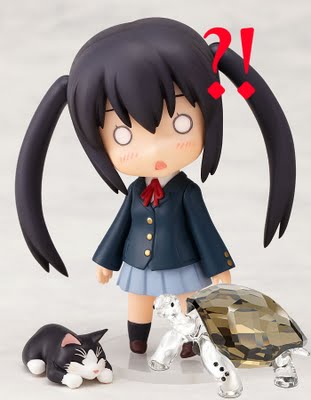 Did you guys know I'm also a Swarovski Crystal retailer? Actually, back at the end of 2006, before I thought about selling anime figures and tagging that function to this site, I joined forces with a local wedding products wholesaler who worked with the old eBay consignment place I was employed with back then. It was from this foundation that I actually started my figure selling business, originally calling it "Chuck's E-Store" This was the final chapter in my 2004-2007 hiatus from this site, of which started with me being an Amway dealer (more very interesting news on that connection in a future post). For those who've been with my site since the beginning remember the days of AMV creations and my brief fame on Newgrounds.com way back in 2003.  This got halted by me being in college, working for Friendly's Icecream and trying to break free from the job world via Quixtar/Amway ^^;;

With the anime figure business doing well, things are going full circle and I'm planning on bringing ALL aspects of life's little journeys into view. Yes, in due time you will probably see me doing Flash animations again, AMVs, video games and bringing back the long overdue anime sections to the site.

In the meantime, I added a Swarovski Crystal section to the store for all to see. It's only two figures to start off; definitely far less than what I use to stock but the site's been gaining some popularity and I've had customers who love Both anime and Swarovski figures. More are bound to be added in due time. They aren't too different since like anime figures...they are rare to come by and if you don't order them in their small window of availability...expect to be spending a large amount of $ from dealers on eBay and other sites trying to rip people off -_- On a negative note, Swarovski has a tight MAP policy (Minimum Advertising Price) for the legit sellers like me. In other words, if I sell figures at a final price lower than that, I lose the ability to sell them -_-; so I have to practically keep them at their full retail price. I won't however inflate their prices if the figures become super, super rare and I make sure they have free shipping for all US customers :-)

Also, hey, my site is called Chuck's Anime Shrine and a shrine can have some crystals in it, too.