The event is going on right now and thanks to Danny Choo, we are getting live feeds and images straight from the event. For those who maybe don't know, Wonfes is the largest figure and custom figure kit convention in Japan. Most if not all of the major anime figure manufacturers are there showing off the newly announced pre-orders as well as some surprises.

If you've been keeping track of the numbers on your Good Smile Company Nendoroid, you'd know they are close to their 100th figure. That figure has been announced and it's actually a non-anime character...Mickey Mouse. You heard me right, the 100th Nendoroid is Disney's Mickey Mouse. I'm fan of him...don't get me wrong but I would have so wanted a Nendo Tifa Lockhart and expected one to come before a Mickey one. Oh well, "a man can dream...a man can dream"- Futurama

It gets weirder than that. Of course for every new Nendoroid figure announce, a new Figma isn't far away. Yesterday Good Smile announced the figma K-On! Yui...but sdly, like ALL the other K-On! figmas...some sort of ass-backwards licencing embargo prevents even ME from snagging them for my store -_-
Anyways..this newley announced figma figure will surely be available in the US. That's right, you saw that link correctly from Danny Choo, it's a Michael Jackson figma. 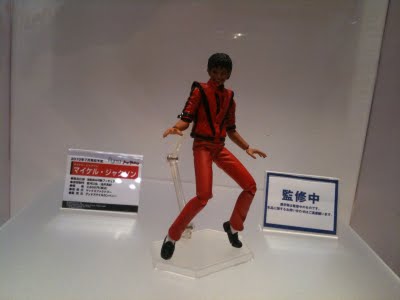 Probably more figures to come, more anime news and more on that K-On! licensing mess in a few...for now let this news populate your mind and try not to hurt yourself with any blunt objects.

-pictures are all from Danny Choo, please visit his site for more images and info (gt to give the credit where its needed ^^)