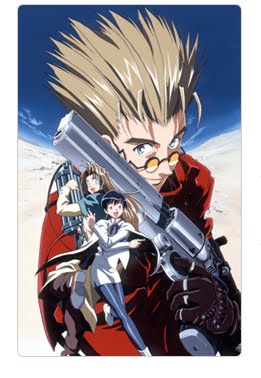 Ah, 90's anime. You gotta love it and to call yourself a true anime fan you have to go back and watch some of the classics here and there. Been watching the entire series of Outlaw Star as of late and Trigun is also what we fans would call neo-cowboy(ish) late 90's anime genius. Just before anime went on that 7-9 year streak of cut-and-paste, school-uniform color-by-numbers school centric series, it was the days of cowboy shootouts on an Earth-2 planet...by a plant. (ok, Outlaw Star takes place on Earth and other spots...but you get what I'm saying)

All kidding aside, FUNimation, on top of everything else they've been buying with DBZ Zeni, announced today in their newsletter that they bought the rights to Yasuhiro Nightow & Satoshi Nishimura's Trigun from FlyingDog, Inc. Like Outlaw Star, the English dubbing was spot-on so doubtful of a re-dub but expect to see the DVD and Blu-ray copies to be around in the stores (and maybe mine ^^) come this fall.

(oh and for those who aren't true anime fans that either just watch Naruto (no worries I like the series, too) or nothing older than 2005...well, expect to see more new Trigun as their is to be a new full length animated movie this spring, in 2010)