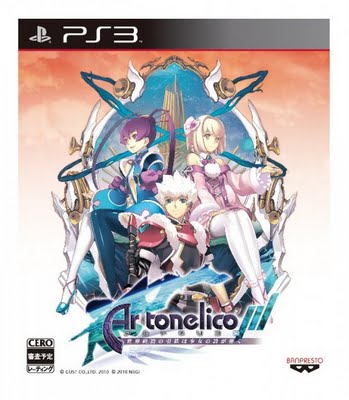 Excited to find out yesterday about Ar Tonelico 3. In case you aren't familiar with the Ar Tonelico series, think of them as a mix between a dating sim and an RPG with similar dynamics to Valkyrie Profile. At the same time the art work is amazing thus making it an anime fan's dream. Hardcore gamers might not have been too fond of the previous installments due to the large amounts of dialog (with very cute 2D girls), and old-school in-game graphics, but so far the series has delivered and the 3rd installment looks to be even better. This one is a leap ahead with cell shaded 3D graphics and looks to utilize more Action RPG commands. I'd expect it to eat up 70+ hours of my time like Ar Tonelico 2 has done (which I still need to finish). Like many good things coming from Japan soon, it won't hit stores in Japan till January and thus won't be in the states till spring or so. Right now...it's just a great piece of eye candy for us.