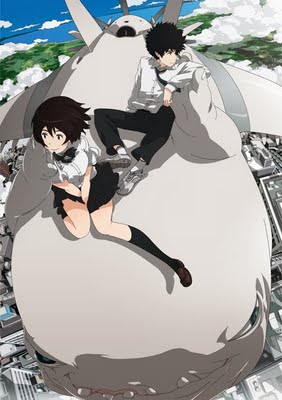 This past weekend the anime movie, Cencoroll was premiered at the NY Anime Festival. Though I was there, due to the insane crowding of the event in general, it was hopeless to even try to stand in there -_-. I didn't mind this too much though since seeing such chaos shows that there is still and will always be life in the anime industry.

The movie is the brain-child of Atsuya Uki who does the daunting task (yet what we all kinda want to do) of writing, designing, directing, and animating most of the anime. It's based off his manga, Amon Game and many like to compare it to a mix of Evangalion and FLCL. What makes this anime rather unique, (besides the whole controlling a flying beast from inside it) is that it's an independent film that is gaining wonderful popularity, accolades and very soon....great profit. Recently even CNN was showing how anime animators are all giving the "starving artist" image with low wages, long hours and seemingly pointless projects by their employers; employers with big names (and big pockets) like Toei and others. Cencoroll seems to show what we see when passion and heart go into an animation with money not trumping those ideals and the good old ideal I hold very dearly...not being owned by a boss. 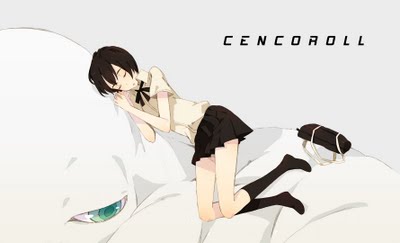 What we have seen in recent years in the anime industry is equivalent to what we see with the video game industry with a word I've said for years before it was a norm... "shovel-ware". "Shovel-ware" in the video game industry is when a big company gets a hold of a popular license and without knowing the spirit of both the industry and the license, thinks that pumping a quick game that has that license will yield the most profits, since everyone will gather to that popular name. Wonder why in God's name there are Barbie games or why most games based on movies are generally terrible? (Wonder why Dragon Ball Evolution was just an insult to all who care for anime?) Anime got great popular internationally at the beginning of the century and some studios have fallen into that trap of pumping out "shovel-ware" (example: fillers)

To see something like Cencoroll, an independent project, come to the limelight and be aided by leaders in the industry like Aniplex, it's very refreshing and makes anyone looking to make their own anime have great hope. Many of us fans of anime are into it because we were inspired by the art and culture and in no other industry do you see the fans do their best to participate, mimic and hopefully surpass their role models.

Check out the trailer to Cencoroll below.