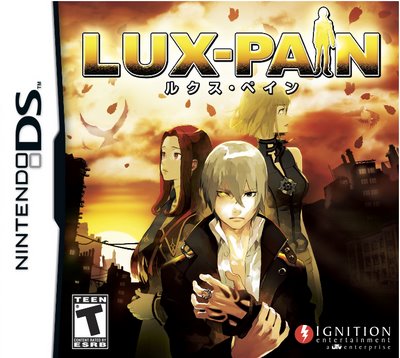 Just recently I finished the Nintendo DS game, Lux Pain. The game was definitely something different. Depending on what type of gamer you are will determine a much different take on the game. Myself along with most of the readers of this blog will find this game more appealing than say a gamer who has no intention of getting into anime or manga.

Lux Pain in short is more of an interactive manga than say a true hands-on video game. It's akin to say a dating sim without much dating. There are moments, mainly in the bonus clips that you can unlock that almost are dates with any of the male and female characters...so almost a dating sim. Lux Pain acts more like a "mystery sim". The purpose of the game is to unlock hidden Shinen (or remnant feelings) in both the area you go to or the characters you meet to unlock the mystery behind cases of these creatures called Silent. Silent, in shor t, are like parasitic worms that feed off of bad feelings (Shinen). It sort of creates a physical reason to why people kill or commit suicide. 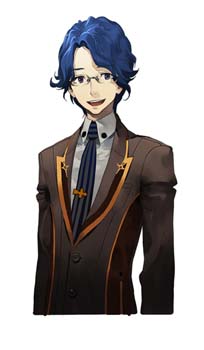 Finding the Shinen is not too hard at all even with a timer that appears in most searches. First time playing, you might miss one or two but a basic cycling of the stylus will let you find the Shinen withou t the need for the "Search Mode" that's available.

Eventually you will run into Silents. This is where the bulk of the actual gaming comes into play and there are three types of ways you'll have to defeat them. The latter two ways; breaking a glass shield then scratching the white orb on the screen or the "stringing corners" one, make decent use of the stylus.

Like dating sims, be prepared for ALOT of text reading. Again, this goes to my point about the game being more of an interactive manga...which is not bad since its still rare to see such games make it here from Japan; something we have been asking for.

The story is a bit confusing at first but like in any anime or manga, you will get to like many of the characters. I particularly li ked Rui and aimed much of my encounters with her first if possible ^^;; The voice acting of the characters is very good and for good reason I'll get in a second. The one issue though that you'll notice off the bat is tha t the text will not match what the voice actors are saying...it more paraphrases their statements. There are some typos and misspellings as well, but as a game developer and with loads of errors I usually catch in my own blogs, I can't bash that too much ^^; The voice acting was good and was because a bunch of popular US voice actors did take role in the game. Actors like Chris Sabat (Vegeta, Piccolo, Louis Armstrong, Kuwabara...etc), Monica Rial (Steel Angel Kurumi's Saki...and many others), and Eric Vale (the voice of my favorite male anime character, DBZ's Future Trunks) 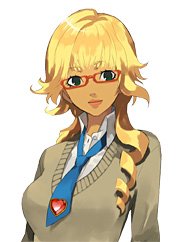 Rui was my favorite by far.
Kudos to Ignition for getting the good dubbers but the issues in the localization can sadly be seen.


Overall, as an anime fan, I give the game a 7/10. Gamers looking for a quick and fun video game that are not anime fans might give this game a 3/10 though. My blog is for anime fans so the higher number is what you'd expect. Rent it first if you can but I didn't mind adding this game to my collection and I give it more credit than IGN or others would give it. 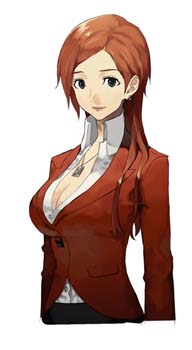 Here's the trailer for those who didn't see it yet: