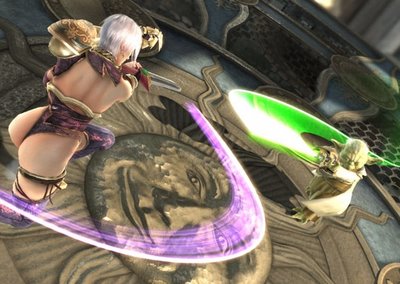 Hey everyone! Got a chance to sit down and get some hands on experience with the Xbox 360 version of Soul Calibur 4. My current Xbox 360 is suffering from the one ring of death so its going to be sent to Microsoft for repairs. Due to this, my review won't be as in depth as for other games but I got a good day of playing thanks to a good friend of mine who might down the road be my brother-in-law. Anyways, on to the game. 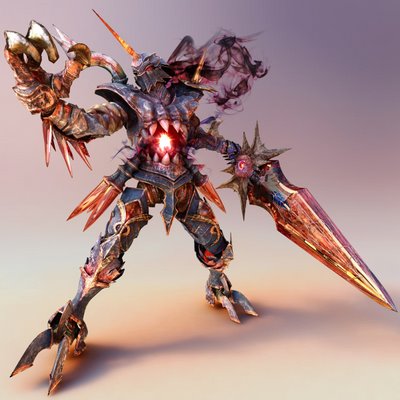 Nothing short of spectacular. Like the previous Soul Calibur games, SC4 manages to utilize the graphic engine very well to bring not only nice looking characters but amazing flow to their movement and fighting that makes it seem like real people (or creatures) are involved and not lifeless dolls. Backgrounds are just as fluid and as graphical as the characters in the arena so there is a great sense of depth to the stages. Wasn't able to unlock all the levels in my allotted time but that's a good thing, since that means there are some to chose from. Most of which have the common closed environment or the familiar open area with the loved or hated ring-out possibility. One stage I noticed does have a row of soldiers that slowly move in and shorten the playing field. Chances are there are more things like that in the stages I didn't play. Speaking of armor and clothing for that matter, great detail was put into the look of them. One quick look and you can see that the Xbox 360's textures were used very elegantly to give the correct texture of even the most detailed clothing. Granted I didn't play the Playstation 3 version of the game but graphically both Xbox 360 and PS3 are about the same with PS3 being the one slightly better but chances are playing both versions of this game, as I'm told seem almost identical graphically. In other words, the characters, the background and also the special effects looks amazing and not plastered in.

Some people complained that they can't see how Yoda, Vader and the whole Star Wars Universe could be added to the whole Soul Calibur storyline but with my first story-mode win being that of Yoda, it seems fine to me. Other than the main story being that of Sigfried's fight against the Soul Blade, most of the characters are mainly on the outside of this anyways, so no complaints on my end. each character does have an in depth role that connects to the two blades and with each other in some way. If you get confused, the more you play, the more a character-relation-graph gets filled so that should fill in the gaps anyone would have. Its a fighting game, so storyline should not be a big issue for any player but there is one there for the reading if you so wish.

Anyone who's play a Soul Calibur game will be familiar to the type of music played in SC4, the chimes of knightly valor and honor like a modern medieval brawl is the same here. For those who are wondering about any Star Wars tracks, you'll be happy to know that the theme from the recent movies is there and with matching stages, too. Not sure if there are any more SW tracks but everything sounds good and if I had some surround sound in my place, I would like it even more. 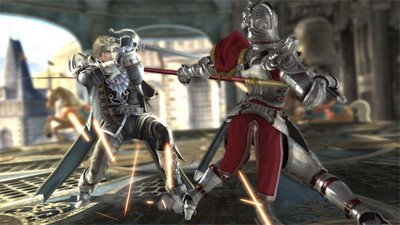 Game Play:
Now for the most important aspect of any game, especially for a fighting game. Fans of Soul Calibur will be pleased to know that the fast fighting action from previous versions is alive and well on the current systems. The fast old-school-like fighting is there and yes, so is the old-school dieing many times in the harder challenges. Yet, whether you are a veteran fighter or a button-masher, SC4 continues what the SC series does for both types of fighters and make both feel at home with a few new additions. These few additions include a first player mode that works like Dark Stalker's Tower Mode where you fight your way up a tower and if you lose, you descend. Also added (at least I don't remember it being in SC3) is the ability to increase the skill level of your character. This gives an almost RPG feel to it and unfortunately in my shortened time I wasn't able to see what difference the increased levels bring.

The Story Mode plays a bit differently too compared to other titles. In the stages you face per character, you will fight more than one enemy per stage. They are divided by the main characters and some randomly created ones (you can also chose random characters for yourself as well). Sometimes they join you and you can have a backup for when the later levels hand you on a plate. Speaking or random characters, the Character Creation Mode is there and this time you can customize the main characters as well and add that customization to their clothing list before battles. Didn't play long enough to see if you can create other characters from scratch like in SC3 but with all the unlocking you can do, it'll of course be a nice long play through to get everything. Being that Soul Calibur is the Gran Turismo of fighting games, this doesn't come as a surprise.

One last addition to the gameplay I must take note and its a big one, is the new Soul Crush ability and armor/clothing slashing effects. Some of the characters have extra armor and clothing (except for Ivy of course ^^;;) and that's because in the course of your fighting clothing and armor gets hacked away. It adds great realism to the fighting and though you won't see any Ikki Tousen-style clothing mishaps, its pretty cool all-in-all. The hacking of clothing is also part of what I feel is the best thing to add in the fighting game and that's the ability to do the one hit kills (that look amazing by the ways) if a character defends too much. It doesn't happen very quickly so don't worry if you need to defend but if you are cheap with your defence (or the CPU is), payback can hurt very badly here. This adds the perfect balance to what I feel is the perfect fighting game. I give this game a 10 out of 10 with the only issue being that the loading times in the character select might be sluggish, and the Xbox Live aspect of it lags a bit too, but that's not much of SC4's fault as it is my network's (and the company running my home internet's fault). Enjoy this game and once my Xbox 360 comes back, you can fight user Chuck Gaffney (me, yeah I used my name ^^;;) as my look-a-like, Kilik.