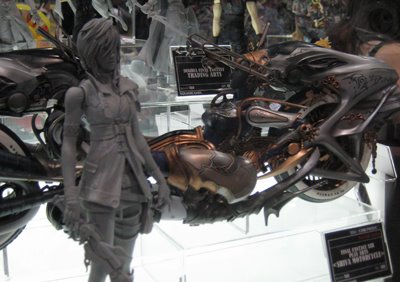 If you were at Comic-Con 08 (unlike me ~_~;;) you would have seen a wonderful booth set up by Square-Enix showing off their newest figures, game trailers and manga. In not too surprising news, they are beefing up their non gaming products to profit off of the growing European and American otaku fans who most likely have FF figures in their must-buy list. As an anime distributor myself, I'll agree very much to Square's interview with Anime News Network on their high selling line like the Advent Children Cloud and Sephiroth. As of very recently, the Play Arts Volume 2 which includes FFVII game versions of Sephiroth, Vincent, Cait Sith, Red XIII, and Yuffie have been selling like hotcakes. I've bought cases of them and I'm already down to my last few ^^;

New figures are on the way from Square including some very nice (and a bit pricey, but worth it) Kingdom Hearts Figures. Other figures on the way include FFXIII figs, like the incomplete one shown in the pic above, a stunning $1000 FFXII Gabranth 1/1 helmet (seen in a previous post), and most likely more from the Final Fantasy VII line. Otaku got more to be excited about but hopefully they come out here by x-mas...chances are late January will be when they are all available outside of Japan.