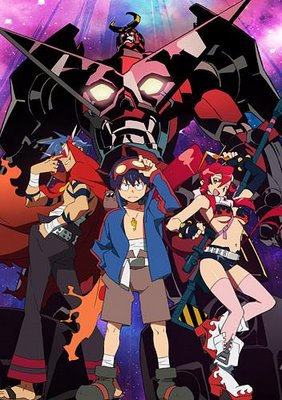 American Otaku like me can cheer for joy for tonight for we get to see Gurren Lagann at 11:00pm ET/PT on Sci-fi channel. We can get a chance to see the hottie Yo-ko over here...of course lets hope the dubbing was done well. If not, we can always watch the pure Japanese subtilted work.

Actually I remember watching Sci-Fi's anime programming back in 1996 before Cartoon Network's Toonami and Adult Swim. I remember seeing Project A-Ko on there along with two other great anime flicks. One of them was with huge mech ships with their power run by the singing voices of pretty anime girls. The other unknown-to-me anime that was with the main girl being a plant in which she rejuvenated in a pea-pod-like thing and the world they were in was a desert I believe. Both of those were on Sci-Fi channel back then so if anyone even knows what I'm talking about..drop it in the comment box.

Anyways.. I'll be up watching the Sci-Fi channel tonight.

Thanks to Anime News Network for the info.