The Mysterious Cities of Gold is Back 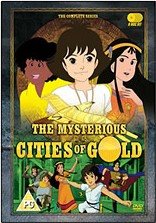 Ok, some of you might not be old enough to remember this but if you watched Nickelodeon back before the the Nicktoons first arrived, you might remember a little show called, "The Mysterious Cities of Gold." Last year, back in 2007, I went and searched on youtube for it to only find a very bad quality opening of the show. To my wonderful surprise, the series about a young boy trying to find his father and the legendary city of gold was actually an anime!! It aired in America early in the morning back in 1986 (I was 3 years old), therefore making it my very first anime and proving I was an otaku long before I knew what it meant.

I got even more good news for all who remember this series: 1) As of March of this year you can buy it on DVD! (Image of the DVD above) 2) A brand new full length anime feature is being created right now! (image of that found below).
I'm really going on memory lane with this one and hopefully this little bit of news will for you, too. Offical site here.

(PS: Notice how it says "From the Creator of Inspector Gadget?" Well, you heard that right...Inspector Gadget was an anime!...well, its animation was Japanese but produced in America and France. Think 1980's Boondocks...without the racial stuff. Maybe more on that in a future post.)