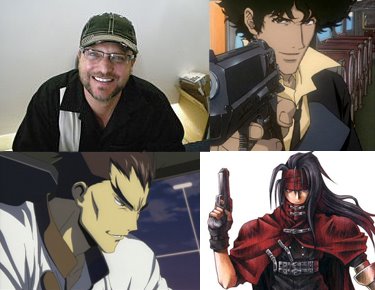 Welcome to my weekly segment about famous anime voice actors both Japanese and
English. Ever listened to an anime and said to yourself, "I've heard that
voice before." Chances are you are correct.

What better way to start off this weekly post by talking about a voice actor
that probably ranks among the most heard English anime voice actors of all
time.

Steven Blum, born April 28th, 1965 in Santa Monica, California has been in a slew of anime, video game, non-anime titles and a surprise one that is not mentioned in Wikipedia. (I'll mention later). Currently he does the voice of Kyoshiro Todo on Code Geass. He is probably most famous though for his voice as Spike Spiegel from the anime classic, Cowboy Bebop. Other notable roles include Orochimaru from Naruto, Tom from Cartoon Network'sToonami segment, Roger Smith from Big-O, Vincent Valentine from Final Fantasy VII Advent Children and Dirge of Cerberus, and even some voices in Halo 3.

Steven Blum also did a documentary about his voice acting called, "Adventures
in Voice Acting." I have not seen it but like other otaku, I would like
to be a voice actor too so that might be worth the watch.

The one mention that you don't see on his wikipedia page, in which you canget his very large list of works from, as of this post is that he also does the voice in the 7-11 commercials.

I have yet to meet him in person but he does go around to conventions and
the like even though he apparently isn't a big fan of anime. He does respect
it though (and hopefully the fat paycheck it should bring him).

-Info thanks to imdb and wikipedia

-Picture photoshopped by me.