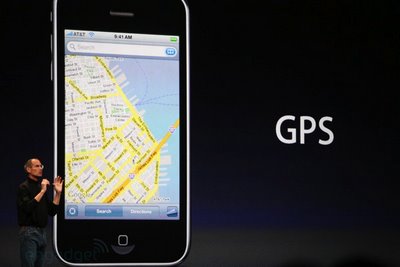 As I write this post, Steve Jobs is doing his keynote speech about the new iPhone 3G. He states its the only phone that beat the original iPhone. From the looks of it... he's right. I'm glad its on the 3G network now and from the picutre provided by Engadget's live coverage, it has the GPS we so wanted. I don't have an iPhone yet but now its up to par and better than features found in the Blackberry phones....at least in my opinion. Every phone company has been making iPhone copies as of late which shows that technology is really progressing in the right direction. The 3rd party apps on this thing will be something to behold I hope.