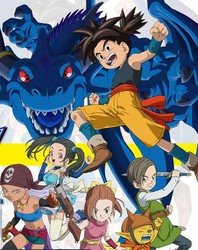 Some of you might be familiar with the Xbox game Blue Dragon; I've yet to play it but many otaku have two strong reasons to play it. First reason is that the game's character designer as you can guess is non other than Akira Toriyama; a quick look at the picture above and you'll easily tell. Secondly, the music composer for this game is the legendary Final Fantasy composer, Nobuo Uematsu. A combination like that really can't go wrong so I'm eager to pick up the game now. As one can expect, there has been an anime series based on the game that's been running in Japan since April 2007 and as of yesterday it was announced that Cartoon Network will run the series with Viz taking the helm...so expect some good voice actors for this one. For all those who are eager to see more from the DBZ creator, this is the chance to. It's set to be on the air here in April 08. More info at the Anime News Network