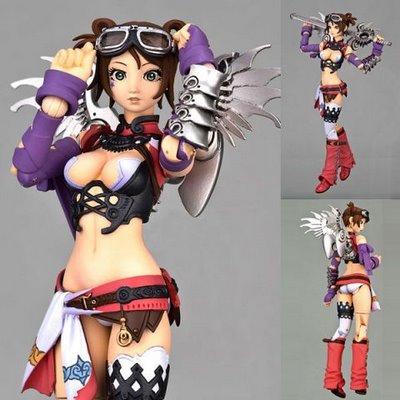 Some of you might be familiar with the Revoltech Fraulein line of figures. These are Kaiyodo's newer line of jointed figures that are intended to be just as artistic as the non-jointed pvc figures. One issue with jointed figures as one could guess is that the ball joints usually take away from the beauty of the figure since they tend to be eye sores. Most American figures suffer very badly from this and also a few of the Japanese figures too...mainly the cheap ones manufactured in China.

The Fraulein line recently released the Rei Ayanami figure and the on mentioned here is the Pocco figure. What's so great about this one is that its designed from a character by the famous artist Shunya Yamashita. If you are familiar with his Arisa, Mirei-San and Sera-Chan figures or his work in general (like I am), this figure would excite you. Sculptor Enoki Tomohide managed to keep Shunya Yamashita's cute and sexy theme.
Like the other Revoltech figures, she comes with 20 points of articulation and accessories to pose her in many different form. These sure beat those wooden human model figures used by artists. Check more details on her here.