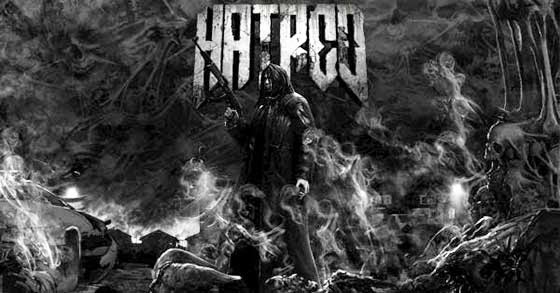 The Interview isn't the only piece of media that recently was given a second chance thanks to consumer revolt.  The granted, very violent and gruesome game, Hatred by game studio Destructive Creation http://www.destructivecreations.pl/ got greenlit on one of not the biggest gaming marketplace, Steam.  Like The Interview, the game became the target of individuals who want to control what people think, watch and play. 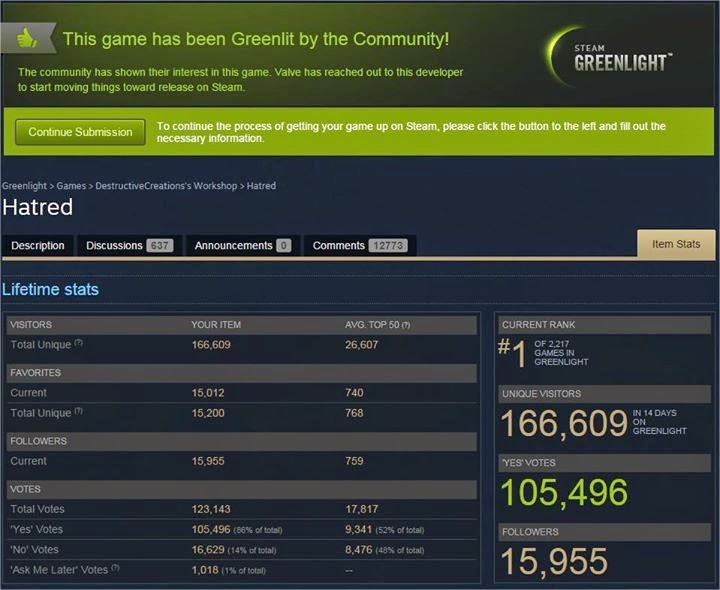 (screenshot of Hatred being greenlit by reddit user  Logan_Mac)

Unlike The Interview, it wasn't a totalitarian brainwashing dictator threatening terrorism that censored it... but instead a group of rather loud PR police (aka Social Justice Warriors) with ideals that sadly somewhat mirror the ideals of a totalitarian dictator.  This isn't anything new to gaming as we've dealt with similar types since the days of Mortal Kombat and Night Trap... but what makes this new PR Police different is that they hide behind a guise of "social justice" when in reality it's a game of narcism, nepotism and internet panhandling that closes any type of criticism.  This new type nanny-state mentality is also different since it has permeated the blogging/news and gaming reviews media through professional self victimization so much so that it created the current clashes with the whole GamerGate/SJW revolt.  Hatred, like other games that aren't even the slightest bit violent, like SeedScape, have had these people cry for censorship and banning be it for the game's content or the views of the developer.

For a short period of time, thus adding to the controversy, members of Steam either caved or sided with the PR police and out of nowhere removed the game from Steam's voting process. (ref: https://archive.today/ix3MU#selection-563.0-563.160) As the story shows, apparently Valve's  Doug Lombardi said that it just needed to go based on what was happening in the greenlight process.  What was happening was that SJWs across twitter were demonizing members gamergate and the game, putting focus on it (you know instead of actual social issues like India's marriage culture and east asia's human trafficking...but no, be it Samus being sexy in Smash Bros, or a videogame being extra violent...those are apparently the top issues of "social justice") Through both the Streisand Effect & them & members of gamergate bringing up the game, it's Greenlight votes and the focus on the game's approval saw a spike, with most people voting yes for the game.  It was this spike in activity that became the scapegoat to the game being pulled...in addition to it's very violent nature.

This action by members of Valve got overturned a day later by the head of the company himself, Gabe Newell.  (Email proof shown here by Let's Player, game critic, one of Steam's top curators, and somebody I've been following on YouTube for a few years now, TotalBiscuit: https://twitter.com/Totalbiscuit/status/545195909555163137).

As of yesterday, thanks to the game being back from it's initial pull and the controversy surrounding it, it quickly got it's deserved greenlight.

...when will the internet PR police learn that the more you tell people not to do something that doesn't actually hurt anybody...it just makes them want to do it more??

I'll admit, Hatred is a terribly disturbing game, I am disturbed by it's content and I feel I probably won't have the ability to play it unless I want to maybe vent some very long time frustrations.  Heck, even the torture scene in GTA V made me kind of want to put the controller down (but then I went back to the fun that can be had in GTA V)   Had SJWs not made a stink about it, I probably wouldn't have been blogging about it now or have been one of the many who voted yes for it to be greenlit.

No matter what you think of the content and what the final product will become, it being greenlit and given the chance for release is a win in the arena of freedom of speech and artistic freedom, just like how The Interview being released is a win in that realm as well.

If you don't want to play it, just don't.  The mentality that wanted to prevent people from watching The Interview is the same mentality that didn't want the creation of this game and whom tell you what anime and games to watch and play.  If anyone is worried about real dangers to society, look no further than North Korea..whom tell their people what to watch, see and think.