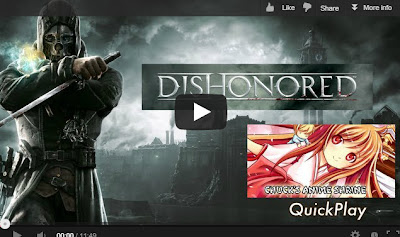 A trend on YouTube that's been around a while for now are Let's Plays.  Some are very good (Yogscast, Game Grumps, Two Best Friends Play, etc).  Like AMVs, it's a common trend and done by most everybody.  Other really cool video channels (gaming related) are the reviews and parodies of the Normal Boots gang (Jontron, Continue?, The Completionist, and Peanut Butter Gamer) and old Newgrounds brethren like Egoraptor.

Before Youtube, I used to be a big part of Newgrounds my amvs and Sephiroth vs Mogs parody) and our AMVs were some of the first AMVs to populate the site since we were hosting them long before the site existed. Same tired story of mine, I know.

Well, thanks to the awesome videos by those guys and with even friends of mine like, thelordxl and Greg Nugent doing similar videos...I think it was about time I came out of my original content retirement and join the game video bandwagon.  In addition to teaching myself game design for both iOS (for Tenshi-Oni) and XNA (for a possible NYC game dev job).... I've also been hard at work, teaching myself Adobe After Effects and Premier Pro, reteaching myself Abobe Flash...plus learning the ins and outs of my new toy... the Elgato Game Capture HD.

As seen in the prior post (of many today ^^;;)  Danielle and I have been making use of the capture card by doing some Game-Grump-like let's plays.  I also snuck in my own "QuickPlay" of Dishonored for the Playstation 3.  You can probably see, the post editing/rendering of Premier Pro is still giving me some bugs (the "jittering" and lack of HD when the original was VERY HD)

It's ok for a first video but my goal is to edit these a bit better every time and in addition to these "Quick Plays"... I plan on doing Jontron-like gaming reviews/parodies and yes, even back to good old Flash parodies.  This is in addition to the Tenshi-Oni game...I didn't forget about that of course ^_^

Also check out my new Twitch.TV account.  At night after a long day of anime figure shipments and more...I'll do some live gaming feeds and we can all just hang out with hopefully some cool game streaming. (more on that in future pots)

Without further delay...here's my first "QuickPlay".  Do mind though... Dishonored is a bloody, violent game, so viewer discretion is advised.

By the way... make sure to subscribe/follow all of those awesome gaming people I mentioned above if you haven't already.  My goal isn't to copy these awesome gamers but to hopefully be worthy of being part of their group....granted, at 29, I'd be probably the oldest gamer in the group if I ever join say PBG's Hardcore GamePlay group.  (would love to take part in those ^^)