A Decade of Chuck's Anime Shrine 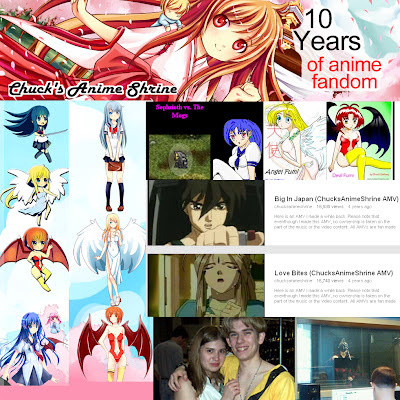 Just wanted to post up something I really should have posted last month when the site technically hit the 10 year mark ^^;; Yesterday was actually mine and Danielle's 10th anniversary as well so I guess it was fitting to post this.

The past 10 years have been what you'd expect for 10 years of time...lots of change, different levels of awesomeness and also level boring drudgery.  The site was something I thought up back in the summer of 2001 before my senior year in high school. 2001-2002 for many reasons being a New Yorker was a tumultuous time in our history.  Despite all of the crap that was going on, I made this site and also met the love of my life a month later in April of 2002.  The following year in 2003 we cosplayed at I-Con as Tidus and Yuna (seen in the kind slapped together montage above) and we were the "cute couple" of the cosplay contest...and we also reenacted the FFX make out scene in from of Inyuasha's English voice actor Richard Cox and the entire Viz Media crew ^^;;  We've been engaged since about the time I added the store to the site in 2007;we'd be married already if the costs of weddings on Long Island weren't so high and they are indeed over priced...on a criminal level might I say -_-

As for the site, it started as a simple fan site in 2002, dedicated to my love of both Dragon Ball Z and Final Fantasy VII; this sort of explains the fact the site has always had a black, orange and yellow color scheme.  Thanks to Toonami and my friend Tiago who now works for Cartoon Network, I became a true anime fan and continued to put more anime series into the site.  This time, if some of you remember were the days of the various anime fan sites/shrines... sadly all but a few; this site, temple-o-trunks, deviant art, and Gaia Online..are still left.

The early success of the site stemmed from both us being one of the first AMV hubs...years before youtube was a glimmer in their founder's eyes.  2003 had so much traffic from the AMV sections and from sites like angelfire and xanga (the pre MySpace and pre facebook) that the site was down on a number of occasions.   From 2003 and up until the end of last year...our AMVs, Love Bites and Big In Japan were a part of the Newgrounds.com collections; receiving almost 1 million views before the asshat anime-hater parts of the site took them down.  Newgrounds was also the place where you can find my first shot at Flash animation, the Sephiroth Vs Mogs short....which I still really need to get back and finish ^^;;  The AMV "Love Bites" was actually loved so much by the original music artists, QED that they contacted me directly looking for me to work with them in editing their future music videos...

sadly, it seems QED split and thus I never got that gig, but the short lived success back in 2003 made Danielle and I think up of mascots to the site and a video game I could maybe code in Flash's actionScript.  Thus, that's where Project Fumi, now known as Tenshi-Oni, got it's start.

Then....came 2004.  I was still working at that horrible job at Friendly's icecream while in college for Computer Science mainly studying to be a video game programmer.  Oddly, back then game programmers in CS was looked down upon; idiot professors who never worked outside the class room thought game programmers and web designers were "stary-eyed and pointless"...simple put, they wanted us to work mundane data entry jobs at cubical-slave hells like Computer Associates (CA) or Sun Microsystems.   CA is/was headquartered here on Long Island with most of the schools like Suffolk Community College and Stony Brook University doing what they could to butter up the execs there by aimlessly prepping us for jobs that one year later.... got sent to Mumbai, India.   70% of the jobs got outsourced and looking back at it, any CS major at that time knew how fruitless the degree was unless.... you became a game programmer.

As for me in 2004, I was in a position where I hated the hell I worked at at Friendly's Ice Cream.  For anyone looking to work there..don't, let them finally go bankrupt this year and just sell icecream in grocery shelves.  I worked 10-13 hours straight with no break and with the worst customers people can imagine....hungry, fat, stupid customers from Selden, NY.  The work environment was so bad that I got kidney stones at age 22 from the dehydration of not being able to eat or drink.  I weighed a measly 115 pounds at 5' 7".

At this same time, my site continued to grow and it was then I was deciding to move on and do something different from the status-quo...and since I saw the "No Track" signs that other in the CS majors didn't..I was checking my options.  I at first thought to start a store here on the site (yep way back in 2004)...but before I could further that path and continue building this site & further my Flash animation & game skills...I got a call from a friend of the family looking for help with their business.  I thought I was a job interview but it ended up being an Amway business opportunity.  I wasn't upset since I am the business type...I simply loath having a boss and my overall goal to this very day is to be my own sculptor of my life.  Having a boss and place to "clock in" to is NOT the life for me.

I had a good start in that business but unfortunately I was looking for freedom from the 9-5 rut more than those who I brought along and their shortfall lead to me financially getting hurt really bad and about 4 years of my life dedicated to that freedom...gone.  From 2004-2008, I was an active person in that business but I traded working on this site, seeing my fiancee more and lots of money to make it come true.  It's nothing at fault with Amway and I still like/use the business.... hell put in amway.com/chuck and yep..that's me and yep I will still take your order if you want anything...but gone are the days of me going to meetings and actively trying to get people to try the business.  Sadly, many here in New York are the "sheep" type and want a boss to tell them where to be...not many want the freedom of being their own business owner :-/

I still wanted that freedom and in 2007...I came back to actively working on this site with the site's blog being started in mid 2006 (thanks to inspiration from Dannychoo.com).  Job-wise: I quit Friendly's in August of 2005, worked a bit at Office Max printing during the x-mas season of 2005-2006 and then worked for a bit at an eBay consignment company called Money Tree Auctions until they and that entire business model tanked (thanks to customers sending in crap yep looking for gold).  Shortly after I used my associates in CS to work to be one of the webmasters to Berger-Bros.com.  To this day I still am working for Berger-bros (but hopefully my anime business will change that soon though...in 2008-2009 I quit for a month before unfortunately going back -_-)

It was back in 2007 that I used what I learned from the eBay consignment job to start selling on eBay by myself.  It was tough though to find what will sell for a profit though...I started selling bulk items I bough on overstock.com and eventually just called up a Swarovski wholesaler whom I know from the old job.  Thus, I began selling on eBay starting with Swarovski crystals..which I still do a little today ^_^

I wanted to work doing what I loved and thus I thought that maybe I could start selling anime products.  Not too long after finding the non-bootleg distribution lines thanks to AAAanime.com, I added the store to my now revived website.  That year I even somehow lucked out and bought anime.fm...which to this day I need to upgrade to a better site (more on that in a bit though)

Since 2007 the store has been doing great...over half a million dollars in sales has gone through since I began just on eBay.  Today I anime figures directly on the site, on amazon and on eBay ^_^

Of course since 2007, some things have changed, back in 2011, the whole blog got practically deleted by google removing their FriendConnect service to focus on Google+ -_-  I've since added Disqus but I think I've lost a bit of my community due to that loss -_-  seems that in these 10 years..my site has outlived a number of the sites and services I've long linked to :-/

Forward a bit from the store's beginnings in 2007 to 2009.  That year I got luxury of attending a meeting at the CEO dinning room at Business Week (pre-Bloomberg takeover).  My political views and long rants against people like Paulson got me to be one of their top commentors ^^;; It helped with the credibility of this site as now I have a full link back to business week.

Later that year, thanks to my contest winners for my store's Banner Contest..I got the ball rolling on the game and mascots I conceived back in 2003... Fumi and the other mascots for the video game later named... Tenshi-Oni.

Just before I get into Tenshi-Oni...I can't forget what happened in 2010 with regards to anime and me...I'm speaking of course about me getting involved with anime voice acting thanks to Bang Zoom! Studios.  Since then I've taken a number of classes...gotten some booth time and hopefully soon I might actually be a character in a popular English dub ^_^  In the mean time though, thanks to Kenneos and the other fan artists...the game Tenshi-Oni has come to life and is now as I speak an actual game on my iPhone.  Kenneos, my fiancee Danielle, my voice acting friend from the Bang Zoom classes, Madi and I will be providing voice work for the game and as you guys have seen...it's coming into focus and though the game was suppose to originally come out last month (delayed mainly due to a move to a new place)..it's happening this year in 2012.

As of a few days ago, I got the rights to use amazing music for the game's boss battles (and soon to be made trailer) by the Japanese Gothic Trance artist, Setsuna.  The music is in addition to original music made by my fiancee and maybe some written by me.  Also, the in-game sprite of Demon Fumi is now complete.  With the songs now in the game...expect anime.fm to get geared up for this as I plan on using it to promote Setsuna's work, my own music and of course, any game/anime related music.  Also, on a side note...I recently joined the Custer Observatory since my love for space and astrophysics (in part thanks to Gurren Lagann) is something I enjoy and I might soon add more to the site.  For example... here's a picture of the Moon I took with my old childhood telescope.... and of course the anime edit that must be done with the Moon.

In closing to this long rant...the future looks bright for Chuck's Anime Shrine...some bumps will be on the way (like the whole gallery needing to be revamped thanks to Apple removing their Gallery function -_-) but I hope that there will be another 10 years of this site with more for the fans, more video games after Tenshi-Oni is complete, more Flash animation shorts and of course... more pages dedicated to the anime we love.