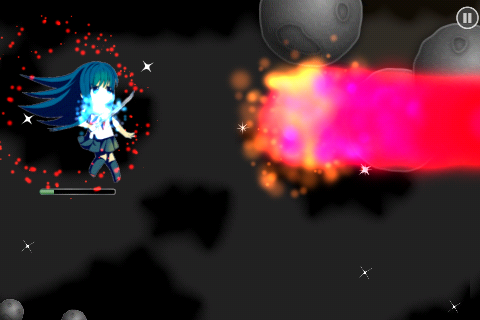 Here's the first (rough) video preview of the Fumi game (TenshiOni) in production ^_^  It was a bit tough to video for now (will improve the video quality, etc. in the next previews), but you can see a quick glimpse of the gameplay.

On there people can post fan art of Fumi and the mascots, game enemy/level/move suggestions, and eventually bug reports.  As of this post, there's really nothing there but that'll change in the coming days and weeks ^_^

Though very rough video, I hope you all like it thus far.

The main character of the game, Fumi has the ability to transform into an Angel, Demon or back her normal state. Each form has advantages/disadvantages based on the enemies she is facing. You can see that some of the blast/hi animations change based on the strength of the hit.

Sprites are still pending but some of the dynamics of her transformations have been added; a two-finger tap changes her form, Red aura representing Demon, White-- Angel, None--Normal. Her movement is controlled by the accelerometer (but was a bit tough to film at the moment ^^;;) A left to right swipe is a sword attack and if you hold down an attack, she charges up and can release a charged blast that differs in color based on her form (akin to say, the Megaman xBuster).

Not seen is a "Super Mode" that will last for a short period of time that boosts the player's power.

That "boost" powerup seen is left over from the initial Space game setup ^^;;

This is being tested and was recorded on my old 3G iPhone so there's a slight bit of lag due to mainly the 3G's processor slow handling of particle effect arrays. It runs very smooth on the 3Gs and above.