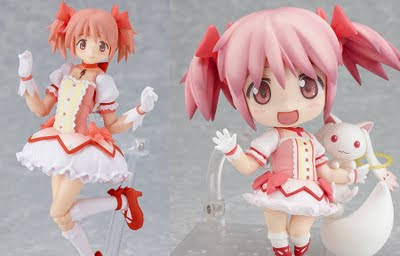 Ok, as some of you may know, there are 2 contests going on.  One for the chance to win both the Madoka Nendoroid and Figma and the other to win a copy of the Mischievous Kiss K-drama series.

The deadline was September 30th for both contests and I did get some lat minute entries.  For the contest to win the Madoka Figures...I've come down to 2 finalists of the batch that submitted a banner for the Sweet Kawaii blog section of the site.  I'm still undecided on who gets the prizes and I might do a vote with the help of my 2300+ twitter followers.

As for the second contest..I'm going to extend it until the end of this month...Oct. 31st.  I'm also going to change a bit of the rules for it.  Initially I said submit any picture regarding the mascots on the site.  I'm going to fine tune that (since everyone actually submitted for the first contest ^^;;) and ask for game sprites of Fumi for the Tenshi-Oni game I'm producing.  Nothing big, it can be one sprite, or an entire animation and just Fumi in her school girl/ normal form.  The game is being made right now for the iPhone and iPad and it's using this as it's game engine, so pixel art can be used but even hand drawn sprites akin to say Guilty Gear can be used.  Site artist, Kenneos is adding her skill into this and the game but even if she ends up as the game's main artist...I would love to make bonus "skins" of Fumi and her forms all designed by different artists.  In addition to the Mischivous Kiss DVD box set, I might add another prize in there too, but at the very least, it'll be the the DVD set. ^_^

Now, all who entered in the Sweet Kawaii banner contest...in the next day, you'll see your work on the section (grand prize winner or not).  Pardon the delay in updatng the site ^^;;


(oh, and as for the figures, the Madoka Nendoroid is on the way to me as we speak..the Figma one iis still not in yet from Japan ^^;;)