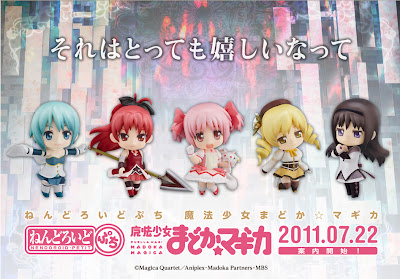 As some of you have seen on the Good Smile Company site, they have announced that there will be a Nendoroid Petite Puella Magi Madoka Magica set.  Here's the newest image of them above.  Excitement for them is definitely on a high.  The pre-order reservations won't start until 7/22 (Japan time).  Pricing isn't known yet but if it's the typical Petite pricing, expect them to be between 500-800+ yen a piece or about 4000+ yen (~$55-$65USD+)

Once known, we'll have them up for pre-order in the store ^_^.  Good Smile Company has been doing this rather mean thing as of late with Puella Magi Madoka Magica and not letting overseas stores get the clearance to stock some of them (licensing BS is mainly to blame -_-)

What you can do in the mean time is email us (orders@chucksanimeshrine.com) and ask to be added to our waiting list for these (there's already a few on the list as of this post ^^;;). In the event we find out that they can't get the clearance to sell them, which should be known by the 23rd the latest, you'll know asap to order from a japan-local store instead (or even GSC directly if they do that for these).