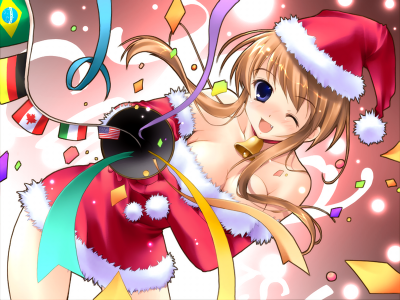 Wow, pardon the lack of blog posts everybody.  Been having a hectic couple of weeks.  The anime figure business has been taking most of my time and add that with a terrible, terrible migraine that nearly hospitalized me...and you have the recent lack of updates ^^;;


No matter what you celebrate (or don't celebrate) hope you all are having a great end of the year.  I want to use this post to do one of 3 three things, 1) Let you know the blog/site isn't dead ^^; 2) Wish you happy holidays ^^ and 3) update you on what is eventually to come...although I probably have stated these in the past as "pending"

First update to note, for all you figure collectors you might see that I have added a number of new anime figure pre-orders, including the loooooong awaited figma Mirai from Danny Choo. Speaking of Danny Choo, I hear that people from his site figure.fm are coming hear ^_^ Hope my store and site can be of use to you and yes..I sell the legit anime figures...though Danny has yet to add me to his list; all of those stores had to pay Danny to be there..I'm not at that position yet.  This, even-though Danny did want to nab my domain, anime.fm.

Next update to note, I promised back in July after the banner contest I did, I'll make a page for the artists...I still will do that for you guys and I really apologies for the delay. On a similar note, I wish to do another contest...probably after x-mas time.  This contest will most likely tie into the mascots Fumi, Yumi and Lily again.  Reason being, Danielle and I will finally be getting a Mac for the holidays which will allow me to create iPhone apps as well as:
Wow, I rambled a bunch here ^^;; Anyways I won't be a stranger too long, I promise.