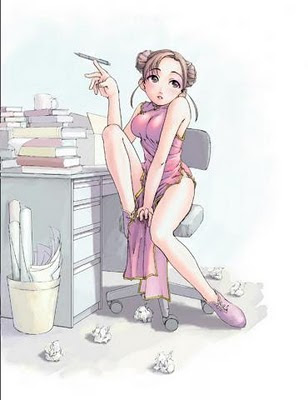 Ah scheduling.  To have a schedule or not to have a schedule... that is the question.  If you have no obligations you can for at least a bit of time, run life without one and let life schedule itself around you.  Time appears to run by faster this way and if you really do have stuff that you have to do (which accounts for 99% of us), it can become stressful when the day around you (or people around you) decide what your day will be.

Like many, I've had a struggle with time management.  Once high school and college faded away and the work/real life moved itself in, I went from a solid schedule to life basically beating me upside the head with distractions, honest deferrals and good old procrastination that hits when the dust settles at the end of a busy, busy week.  Add years of job changes, job hours changes, family obligations, the occasional cold/flu and the want to spend time with the significant other in the middle of all the chaos... life, goals and dreams seem to sit in the corner of my mind like the Atari 2600 that sits in my closet; waiting to be brought back on display with it's successors.

For those of you who've been here on my site since the beginning in 2002, I've for years stated I want to do this and that, add this and that but sometimes they have gotten lost in the ever moving sea of time -_-  Recently you all could see that my blog posts have dropped; the reason I have been able to have a steady blog in the first place is because the day job I've had over these past 3-4 years is a cozy (yet a bit annoying) office job.  It's still a job though; which if you all know my mantra...is selling one's dignity and true freedom for a paycheck.

Three years ago, after a glorious yet tremendous failure in building an Amway business, I brought this site back to life, added the blog, bought anime.fm and added the anime figure store in hopes of gaining that financial freedom that I so aimed for in Amway...but this time with my real passion in life...anime.  The anime store is definitely looking to be a success (minus the lack of capital the darn banks won't give me to retire from the job world -_-)  In 2007 my anime store had a modest first selling year of $40,000 gross sales; 2008, in the middle of the chaos happening everywhere else in the economy, that total rose to a little over $100,000.  For 2009, I changed my selling strategy, which originally was buying and selling stuff on auction on ebay to letting regular, steady sales come in from ebay, amazon and my own site of course. The total sales dropped to $70,000 but less auctions means less chance of losing money since ebay auctions are well, not good if you want to make a living off of these items (unless it's a super rare figure and also as long as the bootleggers didn't flood the market with their cheap, fake crap -_-).

This year and particularly the past 3 months, my goodness... the anime business is busy on all fronts.  Ebay was where I started (mainly from my Swarovski and non-anime stuff) so up until recently, it was my main sale location with steady buy-it-now sales on almost a daily basis.  Today, ebay, amazon and of course right here on CAS has daily sales and pre-orders that have all evened out in quantity.  The work load has turned my anime business from a hobby into a second job with profits surpassing my job for 4 months straight.  August was the busiest by far with profits enough to pay almost 3 months of what the day job would bring.  This year will probably top $120,000 in sales if it hasn't already.  Sadly, it's not as easy as saying, "ok I'll quit my job today now " since basic self-sufficient living on Long Island...even in a hole in the wall is still criminally high....plus with $40K worth of anime stock on hand...that's alot to keep paying AMEX every month.  So still, no real leap of faith yet.

For about 6 months or so I've removed Mondays from my job to focus on the anime business.  While all sounds fine and dandy, being in a stage where it's all me doing the work, still having to work a job and not yet up to that point when I can afford to have a warehouse do the shipping for me....is a stressful position to be in ^^;;;  The amount of emails, invoices, questions, etc I wake up to in the morning is a mountain that has to be scaled....daily.
To ease that stress (though God knows I love the anime figures), it all goes back to time management and setting up that schedule.  When you are in school and work a job, that schedule is pretty much laid out for you but working a cozy office job (far away from home -_- 4 days a week) and working for yourself in your own business takes an extra bit of discipline and strategy.  The anime business is by far the more demanding aspect of my life now; while the job is just changing prices on a website owned by somebody who doesn't exactly understand the web, but needs to of course somehow know I'm busy even without a clear goal, running around with his head on fire and working at the seat of his pants.  If I had the employee base my boss has, I'd not micromanage at all and I'd pay my employees with more respect and with more pay...but then that's just me.

Anyways, I've made that schedule and as you guys can see, I'm back to blogging.  The mountain of emails are still waiting and piling up for me on my gmail account but gone are the days I sit in front of the gmail and answer them all day, they are answered but not as they come in but in certain moments in the day to prevent myself from going nuts @_@  It's something you have to do once things get busy..so if any of you have emailed me and you don't hear from me until the morning or near noon, or near 5pm..don't take offense..the internet is an instant place but emails can and should be answered at a pace that doesn't have to be that very second ^^;;;..Don't worry, the world will not end if I don't answer your email sent at 3:30am; most people, even us otaku are in bed by then.  Sundays are now my "day of rest" where I try to drop the computer, smell the roses and watch the anime I've been missing to remember why I work so hard in what I do.

Despite this sounding kind of grim, my anime business becoming as busy as a second job is just a step in the right direction.  There are small businesses just begging for steady sales and I'm hopeful that the next phases in my business will happen, particularly when I don't have to ship the figures myself any more and have a local warehouse take care of the logistics. From then I just create an automated inventory system for all the sites, sync it with the warehouse and once the time is right..quit the job and simply answer emails and questions from everybody.  Once that gets too much even without the job...then the hiring process will start and then maybe I'll be interviewing one of you for a job position ^_^  Talented anime fans will of course be my first choice once I eventually get to hiring... so, stay tuned on that.

Now, it's time for me to wipe some of the dust off this blog...I think you all have seen the now ended contest post and the Clalaclan figure images scrolling a little too long ^^;;;  No worries, it's in my schedule and should be done this weekend if not tomorrow.