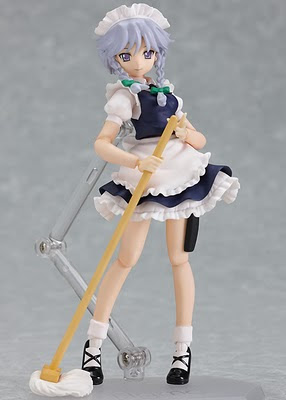 You'd think I'd leave today without talking about the other figma figure that was announced last week? Granted I've been blogging lots lately about figures. I should add some relevant anime news in here as well ^^;;;.

Anyways, some of you are familiar with Touhou Project and some of you probably are familiar with the rarity of the Touhou Project figures. Sakuya Izayoi, be it this new figma figure or the soon to be released Nendoroid figure are not your typical anime figures.  Anime figures are rare and limited edition to begin with, but these are only available at select stores in Japan.  Thanks to my connections though...I am able to nab a few for my store ^^.  The price range sadly can't be the regular rate for a Figma figure but like the other Touhou figures, people on ebay will price hike them to about $200 -_-  I won't do that, so check out her pre-order page and grab one before you are trying to buy a $200 one that might not even be legit :-/

(One really cool feature about the Sakuya Izayoi, she comes with emotiocon stickers that you could use with other figmas and make some really funny scenes ^^)