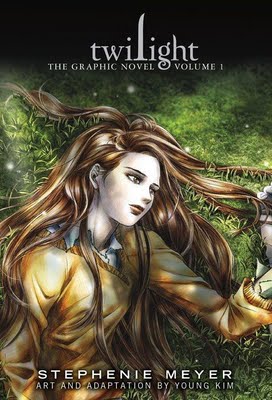 Ok, I'm either going to create some hatred or some happy fans...or both but as some of you might know, Yen Press is printing 350,000 copies of the Manga version of the hit book and movie series of Twilight. As an anime store owner, I naturally placed the manga in my store for pre-order. My fiancee, Danielle is a big fan of the series, she has read all the books and is for both Team Jacob and Team Edward (did I just type that? 0_0). Listen, I'm not a huge fan of the series, I'm more of a Bram Stoker's Dracula or Vampire Knight person. Unavoidable for both fans and non-fans is that the series is big news on all fronts.

Yen Press will make 2 volumes of the manga both of which are set to be a massive 200+ pages; massive for a single manga volume of course. The expected release date of the first volume is around March 17th so fans of the series, I'll gladly help you get access to a copy (while supplies last of course ^^;;). Both fans of the series or non-fans, you can bring on the discussions in the comment fields but for the love of God, not crazy fighting -_-