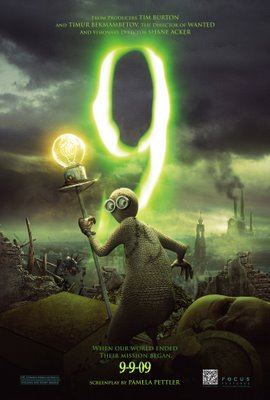 (Update 9/4/09)
Just a few days away from the release of the 9 Movie and there's more to check out, plus another contest for you loyal readers of my blog ^_^ 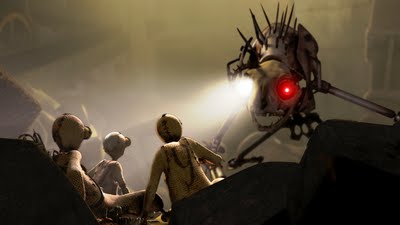 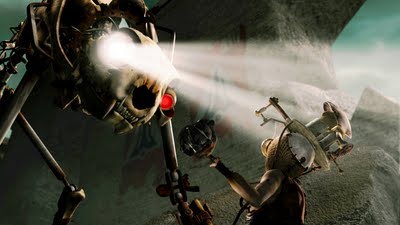 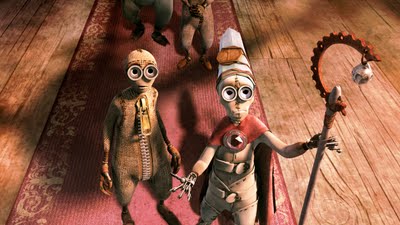 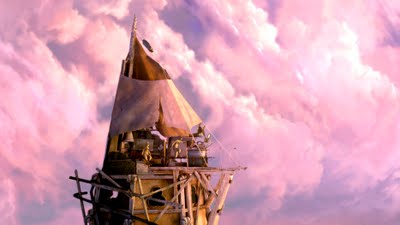 Also...
Elijah Wood and Timur Bekmambetov on G4's Attack of the show:
http://g4tv.com/attackoftheshow/exclusives/68289/Exclusive-Elijah-Wood-9-Clip.html


(Update 8/28/09)
You may have been following the film’s Scientist on Facebook (facebook.com/9scientist).
The Scientist needs some inspiration in these dark times -- are you up to the
challenge?
Begin the challenge by visiting www.9experiment.com . When you scroll over to
the chalkboard, you can participate by clicking on the piece of chalk to draw
a picture. When you’re done drawing your picture, screen grab it, save it, and
post your drawing to the Scientist's wall at facebook.com/9scientist to be entered
into the Chalkboard Challenge sweepstakes to win a fabulous "9" prize pack! There
will be 9 winners, so the lucky winner could definitely be you. However, in
order to be eligible to win, you have to enter by September 9, 2009 (which is
the day that "9" is released in theaters).

(Update 8/13/09)
You can now create your own Talisman on a personalized "infinite zooming" gallery that can be used with Facebook and other social networking sites. Pretty cool. Here's the official word on it:

"The Talisman is a key component in the story of the movie '9'... a device integral to the film's Stitchpunk characters. Fans can now create their own Talisman to share their pictures and thoughts with friends. Check out www.9Experiment.com and dive into the World Talisman, where
user pics from around the world can be viewed in an "infinite zooming" gallery
(trust me you have to experience it - this is the first website to ever do this).
Then create your own Personal Talisman by uploading your own photos, which can
then be shared via email, blogs or social networks.

Once you upload your Talisman, your memories will be preserved forever! After
you've created your Talisman, the site will give you a personalized URL that
you can share with friends (there's also a widget version of this you can stick
on your social networking profile)."

(Update: 8/4/09)
A few weeks back, the Scientist was forcibly removed from his laboratory and interrogated. Upon returning to his lab, the Scientist realized that the Chancellor's men had seized a collection of designs vital to his research. One of these designs holds the key to his next phase of development.

The designs have been shredded... torn into 9 pieces, scattered in 9 secret locations. We must find all 9 pieces and put them back together to reveal a secret alchemical code. Only the typewriter on www.9experiment.com can help decode the hidden message from the designs. Those who find all 9 hidden pieces and use the typewriter to decipher the code will be treated to another fantastic piece of 9” movie art, and can enter for a chance to win a pair of the Limited Edition 9” Shoes from Pony, as well as other great 9” movie prizes.

This link from the 9 Scientist Facebook page also provides more detail about where the 9 clues are hidden around the web: http://www.facebook.com/note.php?note_id=127893662737&ref=mf&__a=1

Take a ride on the 9 San Diego Pedicabs and be the first to see exclusive videos and content for 9 when you unlock the QR code. Make sure you find all of them, there are different codes which will unveil unique content, not to be missed! To prep for a QR sighting, text READER to 4FOCUS for instructions on downloading our
preferred reader so your phone is QR-ready.

Special Edition Collectible Cards from 9 will be distributed daily throughout the San Diego Gaslamp District. The first 100 people to find the 8 character cards plus 1 exclusive machine card and bring their completed set (9 cards total) to NECA (booth # 4345) will win a guaranteed place in line to receive an autograph by Timur Bekmambetov,
Shane Acker, and Elijah Wood.

Also, check out the new Radio on 9Experiment.com, and stay tuned for upcoming fan challenges in the coming days!

Some of you might have heard that Tim Burton and Shane Acker have been working on a special movie project called, 9. Set to release on, you guessed it, 9/9/09, the story of 9 revolves around a post-apocalyptic world where machines have long taken over the world. A scientist then brings to life his creation that resemble the characters from Little Big Planet. I'm a big fan of Tim Burton and I know many of us anime fans are mainly well into the Nightmare Before Christmas (or almost any of Tim Burton's film's) . It has his signature dark, gloomy type of world but looks to have plenty of action in it as well. As I get more info on the story and some other tidbits, I'll either post them here or make a new post for you all to see, so be sure to subscribe to my blog's rss feed for the latest info. Actors like Elijah wood, John C. Reilly, Jennifer Connely and others are bringing their voice talent to the film.

Check the offical site here for the current trailer as well as the 9 Scientist facebook page. Also, the image header for this post is the pre-released poster for the movie so only here and a few selected sites got the rights to show it to you guys ^-^ Gotta love being an anime, otaku blogger.

Anyways, enjoy the trailer and I'll be in the theaters myself to see it; can never miss a Tim Burton movie.

Check out some pictures of the StitchPunk beings below as well as some more info on the movie.

- Meet the Scientist at Facebook.com/9Scientist

- Explore the Scientist's lab at 9experiment.com

- Watch the trailer at 9TheMovie.com

- Visit on your cell phone at 9.msite.tv

- Be sure to download the reader by texting 'READER' to 4FOCUS (436287) so you can decipher the secret messages on the street and gain access to exclusive content!


Official 9 Film Synopsis:
A new era in animated storytelling begins on 9.9.09. Visionary filmmakers Tim Burton (The Corpse Bride, Charlie and The Chocolate Factory) and Timur Bekmambetov (Wanted, Nightwatch) join forces to produce wunderkind director Shane Acker's distinctively original and
thrilling tale. 9 stars Elijah Wood, John C. Reilly, Jennifer Connelly, Martin Landau, Christopher Plummer and Crispin Glover and features the music of Danny Elfman. When 9 (The Lord of the Ring's Elijah Wood) first comes to life, he finds himself in a post-apocalyptic world. All humans are gone, and it is only by chance that he discovers a small community of others like him
taking refuge from fearsome machines that roam the earth intent on their extinction. Despite being the neophyte of the group, 9 convinces the others that hiding will do them no good. They must take the offensive if they are to survive, and they must discover why the machines want to
destroy them in the first place. As they'll soon come to learn, the very future of civilization may depend on them.

1
-Voiced by one of the world's most respected actors, Christopher Plummer, 1 is the Scientist's first creation. As the elder, he is the self-declared leader of the group. He is clever and sly, but also domineering, quick-tempered, and threatened by the new arrival of 9, whose higher intellect leads him to question authority.

2
-Voiced by Academy Award Winner Martin Landau, 2 is a kindly but now frail inventor and explorer who embodies the Scientist's strong creative spirit. An inquisitive personality, 2 is fearless. Director Shane Acker affectionately describes him as a 'salty old dog'.

3/4
-Communicating visually, not verbally, 3 and 4 are the scholarly twins who voraciously catalogue everything they can see and find, recording and building a massive database for the group of the world that surrounds them and the history that led up to their creation.

5
-Voiced by Academy Award nominee John C. Reilly, 5 is a caring, nurturing engineer -- the loyal, big-hearted 'common man' who always tries to play the peacemaker. He is also an apprentice of 2, with whom he shares a special bond.

6
-6, the group's visionary is voiced by Crispin Glover. Although reclusive and eccentric, his bursts of artistic inspiration through drawings made from his pen nib hands may be keys to help his fellow stitchpunk beings navigate their darkest hours.

7
-A brave and self-sufficient warrior, 7, voiced by Oscar winner Jennifer Connelly, is the group's sole female. A fiercely independent adventuress she has been out patrolling the wasteland. To survive, she has adapted, finding the bones of a deceased bird and crafting her signature skull helmet.

8
-Armed with a giant kitchen cleaver and half a scissor blade, the none-too-bright muscle and enforcer of the group, 8, is created to help the others physically survive the dangerous post-apocalyptic world.

9
-To voice the lead role of the newly born -- and aborning hero -- 9, Acker couldn't help but have in mind an actor who was so central to the film set he had worked on years earlier in New Zealand -- The Lord of the Rings: The Return of the King star Elijah Wood.