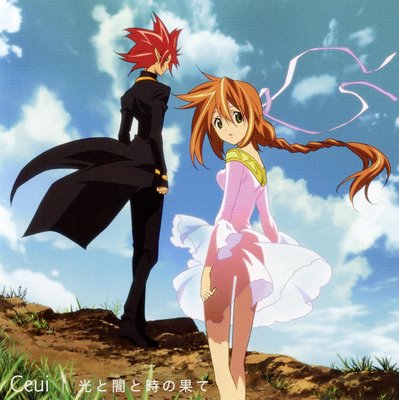 Well, it's been some time since my last AMV. Apparently I've been known as one of the pioneers in AMVs and I've even made it to the top of Helium.com's tutorial on AMV creation..but sadly, its been about 4+ years since my last one (I will make one eventually ^^;;). That hasn't stopped my fiancee Danielle. She has been on a roll with AMVs. Her Final Fantasy Crisis Core AMV was unfortunately removed due to the music artist's neglect for the free advertising and the fact that it got insanely popular.

As of late we have been watching an anime that you might or might not know called Munto. The AMVs below by Danielle and Sapphire Star showcase a bit of this rather short anime. Munto seems to put you in that dream world like anime in the past has many times. It's that same feeling you get when you wake up from a dream that you were very attached to, like another you in another universe. This feeling comes to mind when I watch Munto and did the same for Princess Mononoke and basically all of Miyasaky's work. Munto was animated by Kyoto animation, the studio known for animating Haruhi, K-ON! and Lucky Star. At times the animation looks simple and then it looks complex. If you can still find it left in the stores or on ebay..or just watch it online. It's a great anime and deserves a bit more attention than what it's gotten so far.

Here's the AMV that got me into wanting to view this anime and inspired Danielle. the AMV is by Sapphire Star:

I will note again, AMVs are free advertisement for both the music artists and the anime. The anime, Munto is owned by Kyoto animation, the original creator and all respected licences. The song "That's the Way It Is" is owned by Celine Dion; "Stand in the Rain" is owned by Superchick and all repected music labels. Please use iTunes, Amazon MP3 or anywhere that sells their music. Please purchase Munto where ever anime is sold as well...if it isn't here in my store.