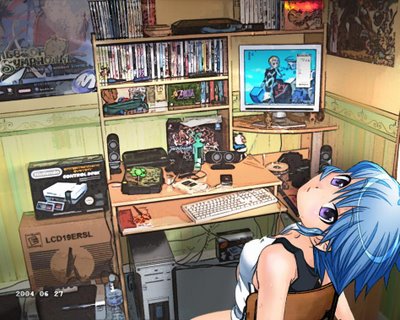 Hey everyone.  So sorry for the gap in blog posts.  I had a vehicular situation that turned out to be a big blessing in disguise.  I didn't get into an accident or anything.  My good old 1995 Buick Regal acted up on me again.  The car is my very first car ever that I got back in 2002.  Need to say, the old girl has 228K miles on it and her fuel pump decided to go after I drove to work 33 miles from my house.  I had to do the train thing again and go without a car...which sucks for anyone who's been in a similar situation.  I lucked out thanks to my father and what would have been a $700 fix was just $400.

So why is this a blessing?  Well, this wasn't the first time this happened and it gave me fuel to ask my job for less commute time.  As you guys know, I was going to quit my job due to the success of the anime store but my boss was uncommonly nice by giving me medical and now due to my dying car, I'm working from home most of the week!  That's right, only Monday and Wednesday do I go into my job.  The other days in the week I still work on my job's projects but from the comfort of the anime base itself...my room.

What's even weirder about this was that I was suppose to start this new schedule next week.  I instead started it yesterday because the phone and internet systems at my job have been down until a few hours ago.  I hope my timing doesn't make it seem like I had anything to do with it ^^;;.

I of course will do my job projects first since I've been rather grateful of the opportunity to be more at home.  The additional time gained from not having to commute 33 miles one way most of the week will give me more time for here and the biz so to pay for Danielle and I's house and wedding.  The economy is bad now but we seem to be on the winning side, which is not very crowded as of now. This brings my question for you guys;

Do you think you'd get more work done at home or at the office?