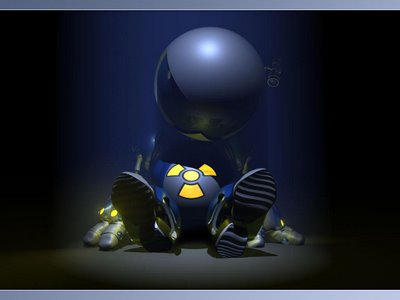 This is a few months late but I just had to write about this.  After reading Sanjo-chan's blog on it I had to put in my two-cents.  Many of you otaku know that Toonami stopped airing in late September.  Many of us can thank Toonami for turing us into otaku.  I started right at the very beginning in 1997 and I've seen up until about a year or two ago when Toonami only had Naruto as their only anime.

When I stated in the past that it was Final Fantasy VII that helped me become an otaku after years of just being a gamer, that was just half the story.  I am still upset of the downfall of Toonami and anime in general on Cartoon Netwoork so I feel I have to let you know my story and where I'm going as an otaku because I might have a hand in what is to come.  If you'd care to read on, here's my story:

Back in 1997, which was now 11 years ago, I was in the 7th grade.  (Yeah, I turned 25 as of last Saturday so I'm an older otaku).  Back then my days were basically that of playing baseball, hockey and football watching the New York Ranger's hockey and playing lots of video games after school.  In September of 1996, Pokemon came to the US and I would watch it every morning at around 6am.  I watched it not because I was an anime fan but because I was a fan of the game, which BTW still holds my record consecutive play time of 13 hours.  Yes, I one day played Pokemon Blue for 13 hours straight.  Sure wish I could have that kind of free time now.  Anyways, anime's height in America at the time was the rare showings on Sci-fi channel and the occational Miyasaki runs on pay-per-view (Princess Mononoke to be exact).  Finding anime was tough here at the time and as both a jock and a gamer, anime wasn't something I really knew of.

The popularity of Pokemon woke up the execs of Cartoon Network and thus Toonami months later came to be with its first host, Moltar from Space Ghost Coast To Coast; Cartoon Network's only in-house production at the time (more on those in a bit).  During the spring of that year I was introduced to Final Fantasy VII by my long time friend, Tiago Barros.  He had a Playstation and I was just a Nintendo boy so I went to his house often to fight him in Dragon Ball GT Final Bout, Bust-A-Move and of course watch him play FFVII.  He would tend to leave mid game to watch Sailor Moon and Dragon Ball Z on Toonami.  I didn't know what the appeal was and I just played the games while he watched.  Shortly, I began to watch Toonami with him and with my love for Tifa in FFVII, I was all over the internet (aka the World Wide Web at the time) looking for more info and getting into Toonami and anime.  It was then I became an otaku.  I of course went beyond Toonami in terms of series to watch since not all anime was shown on there, but it was Toonami that got me into it in the first place (along with FFVII).

Fast forward to 2001-2002, I was in the 12th grade and I was in Miss. Beris' Web design class in New Field High School, mainly to kill time.  A project was due to create a full working website and thus this site, Chuck's Anime Shrine, was born.  Thanks to Newgrounds.com, in which alot of the design ideas came from, my site became popular with otaku since it was one of the few places pre-You-Tube to have AMV videos to view.  Because of this site and my anime fandom, I met Danielle who is now my fiancee and turned this site into a business that is on a roll.  Sales will be double of last years, very close to $100K and as of last month, my profits matched my job's income...even when I only listed and sold a fifth of the items I have on hand and not even a tenth of items on the way.  I can safely say that my job is now completely expendable and my originally failed plan to escape the 9-5 rut is only a few months away or less.

As you see I owe a bunch to Toonami and have lots to be upset for them being gone, but here's the surprise you get for reading through this very large blog post; I'm going to use my newly gained anime presence to try to bring back something like Toonami or Toonami itself.   Remember my good friend Tiago who I thank dearfully for converting me into an otaku?  Well, for the past 5 years he's actually been working in Atlanta with Adult Swim and more recently with Cartoon Network headquarters.  Toonami's death and anime's slowdown on Cartoon Network can be blamed for Adult Swim's transformation to Cartoon Network First Party Only shows but once I'm freed from the chains of a 9-5 job, I'll make this one of my big goals.  So, Tiago, if you are reading this, I'll be in touch with you soon on some things.

Anime.fm is a site I recently aquired that even got the attention of our favorite blogger, Danny Choo and if you are reading Danny, turning Anime.fm into what Toonami was would be a great idea for us on it if you still want to work with me on it ^_~.  Let's also not forget that I'll be training to be an anime voice actor along with making video games for Flash, X-box 360 and Apple iPhone so very soon my dream of being a force in the anime/game industry will be a reality. In other words, I have connection in the right spots.

Hope you guys like the new look of the site and the lack of updates was because of the huge number of anime orders I had to deal with so check up on my updates as they will be more frequent again.  Though I didn't quit Berger-Bros like I wanted to a few weeks ago, the time is soon and with all that is in front of me now, my days an a meager employee are almost done. Below is the final broadcast of Toonami but I'm using this blog post to let you all know that anime won't die if I have something to do about it, since I might be in the coming months.

(Also, don't forget that Toonami still lives on with its Jetstream website)