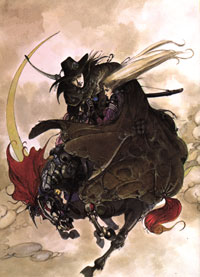 The upcoming New York Anime Fest, in which you might be able to meet me there, will also feature some debuts like this one noted by Anime News Network. Vampire Hunter D "The Wanderer's Ship" written by creator Kikuchi made the story from actually a fan-fic work of Hitomi Yasue. So all you who make fan-fics or roleplay on GaiaOnline, if your stuff is good, you never know, it might become an official story in the work you like ^_^ Final Fantasy and Vampire Hunter D fans will be happy to know that Yoshitaka Amano will be there too.

As for the Fest, I'm probably not going to cosplay but we'll see. It'll be my first convention back since I-Con of 2006.