Montauk Monster Washes Ashore, Yet The Worst People Supposedly Have It 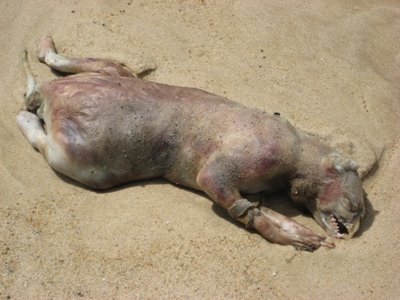 I know, this isn't exactly anime news but this simply had to be shared before it gets forgotten. Yesterday on the local news there was a report of a demon that washed ashore on Long Island's Montauk Point, roughly 2 hours east of my home. What is being dubbed as the "Montauk Monster," this unknown thing is simply disturbing. At first look somebody can maybe guess it was a dog or something that washed ashore...but look closely and you will see that it has a beak!

Now for a little bit of Long Island knowledge..right offshore, east of Montauk is an island called Plum Island, this island is completely restricted and is known as a government poison and I believe animal testing facility. It could very well be some sort of experiment done there or something. CBS news aired it but was very quick on the story...they said they simply weren't sure what it was and that it could have been a fake but they never stated what happened to the body. It was taken away and that's it!

Anyways, us otaku always watch anime about akuma (demons) and shinigamis so could this very well be a real demon or some unknown creature. What's your take on it?

-Image through google when you search "Montauk Monster"

-Video Below from CNN... don't have audio since I'm at my job computer ^^ so I have no idea what they said on it. I first saw it on CBS yesterday.